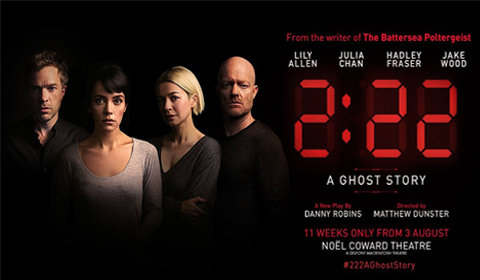 Chart-topping singer Lily Allen is swapping the recording studio for the stage as she makes her West End debut in a gripping new supernatural thriller.

Are ghosts real? Jenny thinks so, but her husband thinks it’s superstitious nonsense. As the pair settle into their new home with dinner guests Lauren and Ben, an argument about beliefs and the supernatural begins. With the atmosphere getting stranger and Jenny convinced the house is haunted, they decide to stay up until 2:22 and find out...

2:22 - A Ghost Story is a new play from Danny Robbins (Rudy’s Rare Records), directed by Matthew Dunster (Hangmen) and with set design from Anna Fleischle (Everybody’s Talking About Jamie).

Dare to discover the truth with 2:22 - A Ghost Story tickets; this edge-of-your-seat journey through the supernatural haunts audiences at the Noël Coward Theatre from 3 August 2021.

The show is not open yet.