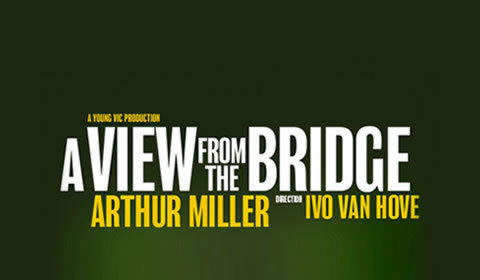 A View From the Bridge Tickets

Wyndham's Theatre
9 seat views
Mark Strong leads the Young Vic’s critically acclaimed production of Arthur Miller’s A View from the Bridge in a transfer to London’s Wyndham’s Theatre. Directed by Ivo Van Hove (Antigone), A View from the Bridge has enjoyed sell-out runs to huge acclaim and now makes its way to the West End for a strictly limited eight week run.

A classic drama, Miller’s A View from the Bridge confronts the American dream in a darkly sinister and passionate tale. Set in Brooklyn, the play sees Eddie Carbone welcome his Sicilian cousins into the land of freedom. But when one falls in love with his niece, the cousins soon discover that freedom comes at a fierce price. When Eddie’s jealousy exposes a deep, unspeakable secret, the repercussions bring about the ultimate betrayal.

A stellar cast is led by Mark Strong as Eddie Carbone. Strong is well-known for his multiple Hollywood blockbusters, including Sherlock Holmes, The Imitation Game and Tinker Tailor Soldier Spy. Olivier Award-winning actress Nicola Walker (The Curious Incident of the Dog in the Night-Time) reprises her role as Beatrice, alongside Phoebe Fox as Catherine. Further cast members include the original Young Vic cast of Emun Elliot, Luke Norris and Michael Gould, as well as Richard Hansell.

Van Hove’s production of A View from the Bridge features design and lighting design by Jan Versweyveld, with sound design by Tom Gibbons and costume by An D’Huys. An electrifying and compelling revival of Miller’s classic text, this critically acclaimed production is not one to be missed. After an extended run at the Young Vic, Van Hove’s A View from the Bridge plays a limited season at Wyndham’s Theatre.

Special notice: Those who are familiar with Arthur Miller’s text will enjoy this pertinent revival, which has received acclaim from both audiences and critics alike. Due to strong themes of violence, sex and adult language, A View from the Bridge is not suitable for children.

Sorry this show closed 11 April 2015, we recommend these similar productions.

SeatPlan Recommends: Wyndham’s Theatre offers excellent seating throughout the auditorium, and it is rare that your view will be restricted from any seat, due to a steep rake throughout each tier. Seats in the higher tiers are much cheaper and offer an excellent overview of the stage, but those who wish to immerse themselves in the production should sit in the Stalls.