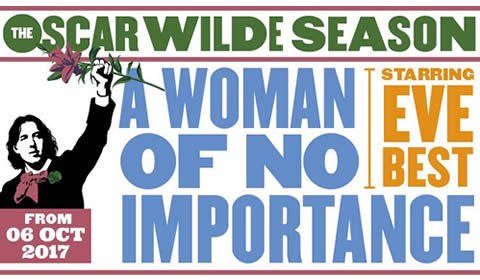 A Woman of No Importance tickets

Vaudeville Theatre
18 seat views
A Woman of No Importance arrives at the Vaudeville Theatre as part of the sensational Oscar Wilde Season. Imbued with all Wilde’s characteristic wit and charm the play explores status, gender and class amidst the high jinks of a glamorous Victorian house party on the turn of the century.

The play follows Gerald Arbuthnot a young aspiring gentleman who is called into the service of the brilliant but disreputable Lord Illingworth. His admirer, a young American heiress, is pleased to see her ambitious paramour ascend the ranks of society. But soon the frivolity of the party will be in jeopardy as the true identity of Lord Illingworth is revealed by Arbuthnot's mother, played by the Olivier Award-winning actress Eve Best (A Moon for the Misbegotten and Hedda Gabler).

Wilde’s deft use of language is never so evident, the fast flowing quips coupled with the intricately unfolding drama of the piece make this play a joyous mechanism to behold.

The piece will be produced by Classic Spring, a new theatre company set up by Dominic Dromgoole, former Artistic Director of Shakespeare’s Globe Theatre. The company’s goal is to honour the incredible and innovative work of proscenium playwrights within the traditional framework for which they wrote.

A Woman of No Importance will be staged as part of the Oscar Wilde Season at the Vaudeville Theatre. The piece will be presented alongside some of Wilde’s most revolutionary Victorian plays that shook the foundations of British theatre, given bold new life by Dromgoole’s company.

Other exciting works in the season include Lady Windermere’s Fan, An Ideal Husband and The Importance of Being Earnest. Tickets for a A Woman of No Importance at the Vaudeville Theatre are available for performances from the 6th October to 30th December 2017.

Special notice: Fans of Wilde's inimitable writing should not miss the chance to get tickets to this witty progressive tale on the Vaudeville stage.

SeatPlan Recommends: Audiences should aim to be as close to the front of the stalls as possible for an impeccable view and the perfect position to be engrossed in this captivating drama.