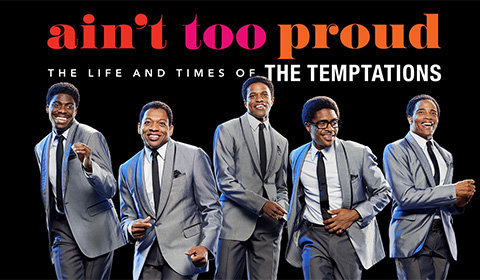 Venue To Be Announced

Legendary Motown quintet The Temptations come to life in this sizzling jukebox musical that bops to the beat of hits such as ‘My Girl’, ‘Just My Imagination’ and ‘Papa Was a Rolling Stone.’ Ain’t Too Proud – The Life and Times of The Temptations has been a huge success on Broadway since it opened in 2019, being nominated for 11 Tony Awards. A London production is rumoured to be coming soon.

Ain’t Too Proud charts The Temptations’ story from humble beginnings on the streets of Detroit, to rock & roll icons in a politically turbulent era of US history. Each song is performed with dazzling choreography and the pin-sharp style of the group is reflected throughout every aspect of the production.

The Broadway cast featured Derrick Baskin (Memphis), James Harkness (Beautiful: The Carole King Musical), Jawan M. Jackson (Motown The Musical), Jelani Remy (The Lion King) and Ephraim Sykes (Hamilton, Memphis) as the original lineup – with Baskin playing Otis Williams, the only surviving member of the original five who continues to tour with The Temptations to this day. No London casting has been announced.

Tony Award-winner Des McAnuff (Jersey Boys) directed the Broadway production and is reported to be searching for a London venue to house a West End transfer. Sergio Trujillo won the 2019 Tony Award for Best Choreography for his work on Ain’t Too Proud.

Ain’t Too Proud – The Life and Times of The Temptations will bring the best of soul and Motown, as well as an incredible story of family, friendship and perseverance to the West End. Be sure to add this Broadway hit to your wishlist.

Playing at: Venue To Be Announced, London, London, E2 8AA

Special notice: This one is for true music-lovers – particularly those who adore soul, Motown and R&B. Anyone who has found themselves singing along to the numerous hits of The Temptations will enjoy this thrilling musical.

The show is not open yet.

Get Up, Stand Up! The Bob Marley Musical