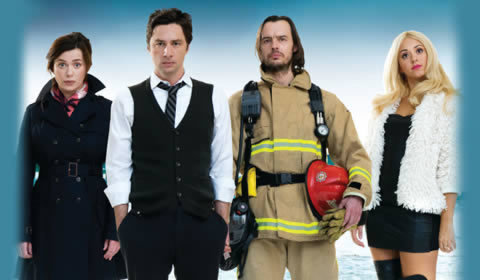 Duke of York's Theatre
1 seat views
Scrubs star Zach Braff writes and stars in an all-new comedy hitting a UK stage for the very first time. Originally opening Off-Broadway, All New People transfers to the West End, following a brief tour at key UK venues. Opening at the Duke of York’s Theatre for a strictly limited ten-week season, All New People is the wonderfully witty tale of friendships sure to entertain audiences.

Set in the dead of winter on Long Beach Island, All New People follows down-on-his-luck Charlie who is heartbroken, downbeat and reckons he has hit rock bottom. Celebrating his 35th birthday at his wealthy friend’s luxury apartment, Charlie plans to hide away from the rest of the world for a while. Unfortunately his plans are scuppered when a motley bunch of misfits turn up, and soon the troupe find themselves tangled together in a beach house where the mood is anything but sunny.

Making his West End debut, Zach Braff stars as Charlie in this wacky dark comedy. Best-known for his role in Scrubs, Braff has been nominated for 17 Emmy Awards, 3 Golden Globe Awards and has also received a Grammy Award for Garden State, which he wrote, directed and starred in. He is joined by Eve Myles (Torchwood) as the eccentric British estate agent, Susannah Fielding (RSC, National Theatre) as the hired beauty and Paul Hilton (National Theatre) as the local fireman.

All New People is directed by Peter DuBois, who most recently helmed the Evening Standard Award-nominated drama Becky Shaw at the Almeida Theatre. Featuring a starry cast, this hilarious new comedy is the hottest ticket of 2012! Opening at London’s Duke of York’s Theatre, make sure you don’t miss out!

Special notice: Containing sexually graphic content, explicit language and references to drugs, All New People is not suitable for those under the age of 16. Fans of dark comedy and sitcoms will enjoy this new production.

Sorry this show closed 28 April 2012, we recommend these similar productions.

SeatPlan Recommends: Seats at the Duke of York’s Theatre offer generally good views, with some excellent bargain seats to be found in the centre of the Royal Circle. Sit in the Stalls to feel fully immersed, but be aware that the stage is quite high.