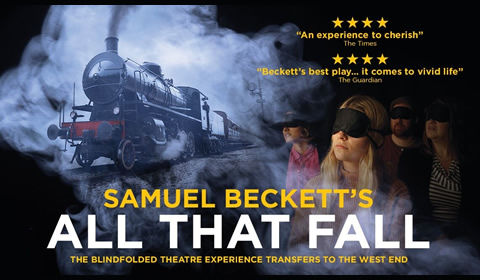 All That Fall tickets

Arts Theatre
2 seat views
Prolific director Max Stafford-Clark brings a radical live version of Samuel Beckett’s one-act radio play All That Fall to the West End. Brought to life by his company, Out of Joint, All That Fall is a rare live production of one of Beckett’s most well-known radio pieces, set to open at London’s Arts Theatre for a limited run that begins on April 13th 2016.

Following an acclaimed run at Wilton’s Music Hall, Stafford-Clark’s newest production plunges audiences into a dark and unsettling journey that defies typical theatre. All That Fall sees audiences completely blindfolded, as actors create a live soundscape around them that tells the story of an old woman who heads out to meet her husband at the station on his birthday. Immersing audiences in a 360 degree live sound experience, the production is sure to amuse, entertain and unsettle audiences as events in the play quickly take a very dark turn.

All That Fall was first heard in 1957, and quickly became recognised as one of Beckett’s most naturalistic pieces, also marking the first time that he wrote a female protagonist. After a successful run at Wilton’s Music Hall, All That Fall is set to transfer to London’s Arts Theatre, plunging audiences into a live experience unlike anything else on the West End. With stunning sound and poignant performances, Stafford-Clark’s latest production is sure to astound audiences.

Age recommendation: 12 and up

Special notice: Those who enjoy creative productions will find something totally new in this radical adaptation of a Beckett radio play. Please note that there is an age recommendation of 12 and up, with latecomers not admitted.

Sorry this show closed 14 May 2016, we recommend these similar productions.

SeatPlan Recommends: The Arts Theatre London offers excellent views throughout the theatre, but for this production audience members are blindfolded, ensuring an immersive experience wherever you happen to be.