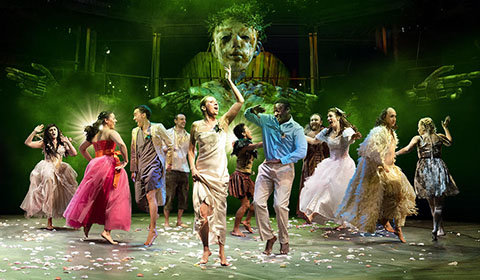 Barbican Theatre
18 seat views
As part of a new RSC season, a playful new version of Shakespeare’s beloved romantic comedy As You Like It comes to the Barbican stage.

As You Like It follows Rosalind as she is banished and journeys into exile with her best friend Celia. Along the way, however, she becomes an object of interest for Orlando, who has also been forced in the forest. Featuring a cross-dressing heroine, fools, songs, and questionable poetry, As You Like It will see if love really does conquer all in this production filled with physical comedy, music and puppetry.

Kimberley Sykes is an accomplished director, having previously headed RSC productions of Dido, Queen of Carthage and A Midsummer Night’s Dream, as well as City of Angels for the Donmar Warehouse and East is East for Trafalgar Studios.

The Barbican’s production stars Lucy Phelps (Witness for the Prosecution, Julius Ceaser) as Rosalind, Sophie Khan Levy (Maydays, Hanna) as Celia, and David Ajao (Hecuba, Barbershop Chronicles) as Orlando, all of whom will also star in the season’s Measure for Measure.

A comic tale of love and friendship, As You Like It arrives at the Barbican on 26th October.

Special notice: If you’re interested in seeing one of Shakespeare’s more fun comedies, this production will definitely be the one for you!

Sorry this show closed 18 January 2020, we recommend these similar productions.

As You Like It seat view photos show what view you will get for your money. Unfortunately we do not have any seat views for this show.