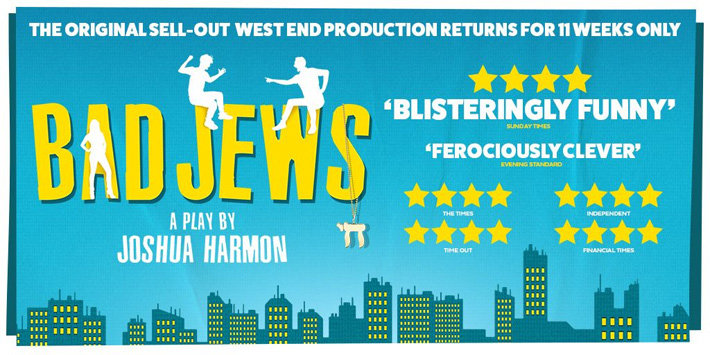 Family, faith and identity collide in Joshua Harmon’s viciously hilarious comedy Bad Jews, which returns to the West End in 2022.

When the patriarch of a Jewish family passes away, his grandchildren gather to decide who should inherit a beautiful necklace. Strong-willed Daphna, who along with her Israeli boyfriend considers herself a “real Jew”, assumes that she’s the worthy recipient, but her wealthy cousin Liam and his non-Jewish girlfriend Melody have other ideas. As the cousins come to blows in a hilarious clash of wills, they begin to second-guess their beliefs about family and faith.

Casting and further creatives are to be confirmed.

Exploring Jewish identity and history through the lens of one hilarious dysfunctional family, book Bad Jews tickets and enjoy this “ferociously clever” (Evening Standard) show at the Arts Theatre this summer.

Bad Jews seat view photos show what view you will get for your money. Our users will start adding seat views when the show opens.