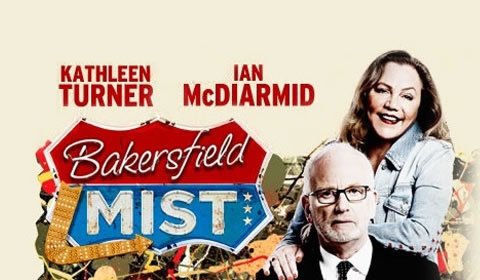 Bakersfield Mist follows down-on-her-luck bartender Maude, who discovers what could be an original Jackson Pollock at the thrift store. Convinced that the painting is worth something, she contacts art expert Lionel Percy to come and inspect the work, all the while dreaming of her own fame and fortunes. But when the self-important Percy arrives, he is less than impressed by Maude and her modest trailer park home. Soon, a discussion ensues about the value of “real art” and the two clash in a war of words, bashing each other’s class and backgrounds.

Broadway star Kathleen Turner returns to the West End for her third starring role, opposite Olivier and Tony Award-winner Ian McDiarmid. Turner is well-known for her tour-de-force performance in Who’s Afraid of Virginia Woolf, as well as The Graduate and Cat on a Hot Tin Roof. She has extensive screen credits, including appearances in hit sitcom Friends and Californication. McDiarmid is best-known for his villainous role in the Star Wars films as well as the 2006 Broadway revival of Faith Healer.

Directed by Evening Standard Award-winner Polly Teale, Bakersfield Mist features sound design by Jon Nichols, lighting design by Oliver Fenwick and design by Tom Piper. A quick-witted comedy of manners, Bakersfield Mist will have audiences questioning themselves as they change their sympathies between the two leads. Teale’s production opens at the Duchess Theatre for a limited run beginning in May 2014.

Running time: 85 minutes with no interval.

Special notice: Recommended for adults, Bakersfield Mist is a quick-witted and insightful play that can be enjoyed across broad audiences. Starring two legendary actors, this is an amazing opportunity to see them unite live on stage!

Sorry this show closed 09 August 2014, we recommend these similar productions.

SeatPlan Recommends: Sit in the Stalls of the Duchess Theatre for the best overall view. At this theatre, it is best to sit towards the centre of each row, as the rows curve around the stage and are often restricted view seats at the very ends.