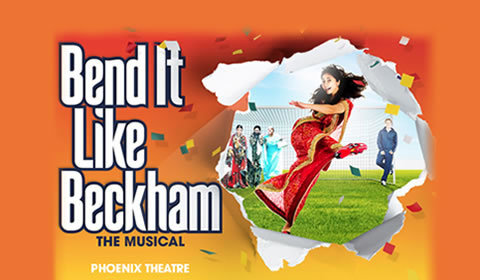 Phoenix Theatre
124 seat views
After many years of speculation, Bend It Like Beckham has finally arrived in the a West End as a brand new British Musical.

Adapting their onscreen smash hit for the stage, Gurinder Chadha and Paul Mayeda Berges have teamed up once again, this time with the added challenge of adding song and dance to their work.

Like the film, the story focuses on the character of Jess Bhamra, an 18-year-old Sikh girl living in Southall with her traditionalist parents and soon to be wed sister, Pinky. Bucking tradition, Jess loves playing football despite having been forbidden to participate by her parents. Soon she finds a friend in Jules, a female football player for the Hounslow Harriers who convinces Jess to join her team.

Problems arise for both Jess and Jules as Jess' parents become suspicious of her activities and Jules' mum starts suspecting her daughter might be gay. Further issues occur when both girls fall for the same man; their football coach...uh oh! Can the girls' friendship overcome their parent’s expectations and their scrabble over a boy? Can they work together to win that all important match?

Bend it Like Beckham is directed by Chadha with original music by Howard Goodall and lyrics by Charles Hart. Aletta Colins provides choreography and musical staging, with set by Miriam Buether and costume by Katrina Lindsay.

Special notice: Lovers of football and musical theatre alike will enjoy this show, which is fun for all the family.

Sorry this show closed 05 March 2016, we recommend these similar productions.