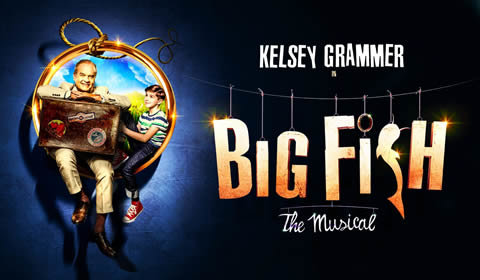 The Other Palace
50 seat views
The Broadway hit musical Big Fish swims its way across the Atlantic and into the West End this November. Celebrated writer John August, original screenwriter on Tim Burton’s adaptation, returns to transform the fantastical tale for the stage. The musical stars titan of the small screen Kelsey Grammer, who makes his London stage debut as Edward Bloom.

Big Fish tells the story of Will and his larger than life father Edward Bloom, a man brimming with a thousand strange, surreal and enchanting tales. With Edward on his deathbed, his son finally begins to unknit the intertwining strands of stories woven throughout his father’s past.

In his last days Edward and Will embark on a meandering and heart-warming odyssey through a plethora of tall tales, filled with beauty, love and imagination.

Emmy, Tony and Golden Globe Award-winner Kelsey Grammer is best known for his character Dr Frasier in the US sitcom Cheers, and its Emmy Award-winning spin-off series Frasier. Grammer made his Broadway musical debut in 2010 playing nightclub owner Georges in La Cage aux Folles for which he received a Tony Award nomination for Best Leading Actor.

Taking inspiration from both Daniel Wallace’s original novel Big Fish: A Novel of Mythic Proportions and the Tim Burton directed film which he himself penned, John August returned to adapt this beautiful story for stage.

The musical features a score by the Tony Award-nominated American composer Andrew Lippa whose credits include orchestrations for the 1999 Broadway revival of You're a Good Man, Charlie Brown and writing credits on Wild Party.

This beautifully, strange and stunningly unique tale arrives at The Other Palace for a limited Christmas run from 1st November to 31th December 2017.

Special notice: This sensational adaptation will serve as a delightful seasonal treat for fans of Tim Burton’s classic film. Plus, followers of Grammer’s award-winning body of work shouldn’t not miss the chance to catch his exciting West End musical debut.

Sorry this show closed 31 December 2017, we recommend these similar productions.

SeatPlan Recommends: The centre of the stall is the perfect position to soak up all the surreal and intimate tall tales this magical production has to offer.

This is a stunningly creative show with a perfect blend of wry humour and pathos. There were very few... More

This is a stunningly creative show with a perfect blend of wry humour and pathos. There were very few dry eyes at the finale, with many sobs audible. I like to think of myself as being quite staunch, but this show hit me right in the feels! Performances were all very strong, with Kelsey Grammer heading up a sterling cast. The use of screens and projections really brought this story (within a story, within a story) to life beautifully. If you get the chance to see this show before the run ends, definitely do! It's a winter warmer.

LOVED this show! Such a gem. Got to speak to Kelsey Grammer.

Before seeing this show one word of warning - take tissues. I won't spoil the premise of the show but... More

Before seeing this show one word of warning - take tissues. I won't spoil the premise of the show but what I will say that you will come out of this show with a new outlook on life. This show is not to be missed and I thoroughly enjoyed it. In a small intimate venue this show was performed brilliant by incredibly talented cast members. I loved the music, story and the clever use of projection. Make sure you catch it on its short run. Not to be missed.

This show had me in tears. Exceptionally well cast, and amazing music. Really hoping this will transfer... More

This show had me in tears. Exceptionally well cast, and amazing music. Really hoping this will transfer or get a second life at The Other Palace.

Great acting and very clever use of the stage and set. Enjoyable songs and moving plot.