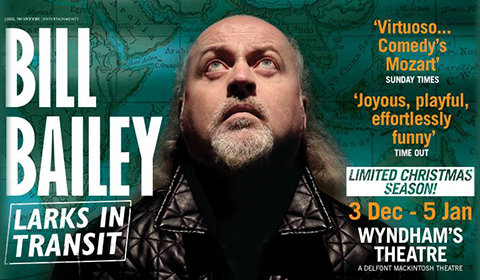 Wyndham's Theatre
8 seat views
Celebrated comedian, musician and actor Bill Bailey brings his newest touring show Larks in Transit to the West End’s Wyndham’s Theatre for a strictly limited festive season. Documenting his 20 years-worth of travelling as a stand-up comedian, the show is packed full of anecdotes and travellers’ tales, combined with his signature musical virtuosity.

With decades of national and international touring behind him, Bailey has spent a good portion of time on the road. Drawing on his real-life experiences as a travelling musician and comedian, he has assembled Larks in Transit, a show of hilarious stories, reflections and politics. True to form, the show is peppered with music and songs, ensuring a varied and incredibly funny evening.

Bill Bailey began working the touring circuit before being offered his own television show on the BBC in 1998. Since then, his screen credits have included hosting Never Mind the Buzzcocks, as well as regularly appearing on panel shows such as QI and Have I Got News For You, as well as roles in comedies including Black Books, Hot Fuzz and Run Fatboy Run.

Last appearing in London in 2015 with his show Limboland at the Vaudeville Theatre, past successful tours have included Tinseltown, Qualmpeddler, Bewilderness, Dandelion Mind and more. Expect a night of hilarity, as Bailey fashions a symphony from a ring tone, tells us the story of Old McDonald and a re-imagining of the Stars and Stripes.

Larks in Transit has previously toured Australia and New Zealand, where it received praise from audiences and critics alike. The production runs for a strictly limited month-long season at London’s Wyndham’s Theatre, playing from 3 December 2018 to 5 January 2019.

Bill Bailey: Larks In Transit seat view photos show what view you will get for your money. Unfortunately we do not have any seat views for this show.

This is the second time I have seen this show having seen it at the Hammersmith Apollo some month... More

This is the second time I have seen this show having seen it at the Hammersmith Apollo some months ago and I found it just as funny, if not funnier. Bill Bailey is a comedy genius, so talented and so intelligent. He completely gets his audience and has them in stitches for a good 2 hrs 15 mins. He never fails to impress the audience with the amount of musical instruments he plays too!!

Love Bill Bailey seen him twice now, the show keeps the Classic well known formula of what makes him funny. The show also keeps up with current events keep the material fresh.

So so funny and entertaining. Excellent and as good As anticipated.

Brilliant show, everything you would expect from Bill: stand-up, excellent music and a bit of cra... More

Brilliant show, everything you would expect from Bill: stand-up, excellent music and a bit of craziness. A couple of bits he has used before, but mostly a new and excellent show.