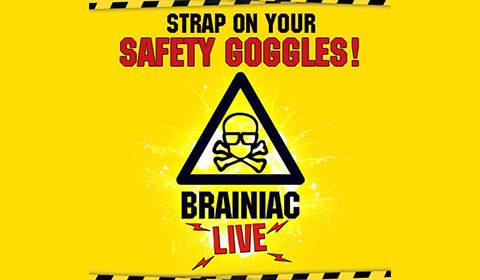 Garrick Theatre
8 seat views
A beloved science-centric TV programme has been translated to the stage in glorious technicolour. Brainiac Live! is an explosive hour of experiments, facts and fun that runs at the Garrick Theatre for a limited four weeks from 31 July 2019.

The original TV show ran between 2003 - 2008 and was presented by Richard Hammond and then Vic Reeves. Brainiac Live! has delighted adults and children across the world since 2008. The larger-than-life show has headlined science festivals and garnered fans from Abu Dhabi, Australia and beyond. More than 400,000 people have so far seen this bonkers and brilliant display, which The Guardian summed up as, “Science Museum meets Top Gear”.

Much like the television show it spawned from, Brainiac Live! is a giddy exploration of the world of science with no shortage of hi-jinks. There are exploding dustbins, Airzooka, superpowered spinning chairs and a dash of Beyoncé to top it all off.

The show is directed by Andy Joyce, who also stars in the show along with science buffs Rik Warren and Maggie Frazer.

Whatever you do, don’t try this at home! See the mind-bending Brainiac Live! when it plays for just four weeks at the Garrick Theatre from 31 July 2019.

Special notice: Anyone who grew up with the television show shouldn’t hesitate to secure Brainiac Live! tickets for a happy dose of nostalgia. Children and adults alike will love this entertaining show. Please note that it features loud bangs.

Sorry this show closed 01 September 2019, we recommend these similar productions.

Brainiac Live! seat view photos show what view you will get for your money. Unfortunately we do not have any seat views for this show.