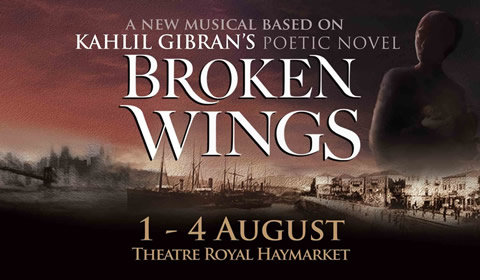 Theatre Royal Haymarket
10 seat views
Nadim Naaman brings his major new musical Broken Wings to the London stage, premiering at the West End’s Theatre Royal Haymarket. Playing a strictly limited number of performances, the touching new show is based on the works of best-selling poet Kahlil Gibran and features a 9-piece orchestra in a semi-staged production.

Lebanese poet Kahlil Gibran is the third best-selling poet of all time, with his seminal masterpiece The Prophet becoming an instant international best-seller. Recognised for his work around the world, Broken Wings is a homage to his writing, created by West End performer Nadim Naaman and contemporary composer Dana Al Fardan.

Combining autobiographical experiences and Gibran’s The Prophet, Broken Wings begins with an ageing Gibran in New York City. As he reflects on his life, audiences are transported to Beirut to see his 18-year-old self fall in love with the daughter of a family friend. Despite being set decades in the past, the story contains several themes that are still relevant today, covering gender equality, immigration and traditional versus contemporary lifestyles.

Nadim Naaman has written the book, with music and lyrics by Dana Al Fardan. The production is produced by Ali Matar and is directed by Bronagh Lagan (Little Women at the Hope Mill Theatre, The Adventures of Pinocchio at the Ambassadors Theatre).

With a diverse creative team and stellar cast at the helm, Broken Wings is a unique new musical that remains strikingly relevant today. Addressing key social issues accompanied by a brand new score, the production is guaranteed to enthral lovers of new musicals. Broken Wings plays at the Theatre Royal Haymarket from 1 August to 4 August 2018, with a press night on 2 August 2018.

Special notice: Those interested in international literature, new musical theatre and diverse productions will want to catch this one.

Sorry this show closed 04 August 2018, we recommend these similar productions.

Broken Wings seat view photos show what view you will get for your money. Unfortunately we do not have any seat views for this show.