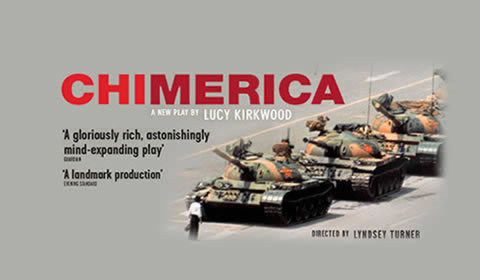 Harold Pinter Theatre
1 seat views
Smash-hit, record-breaking new play Chimerica transfers to London’s Harold Pinter Theatre following a sell-out season at the Almeida Theatre. Written by Lucy Kirkwood (NSFW, Royal Court) and directed by Lyndsey Turner (Posh), Chimerica is the stunning production that took Kirkwood 6 years to develop. Examining the changing fortunes of China and America, Chimerica fuses the two and discovers how they both shaped our own future.

Set in Tiananmen Square in 1989, the story begins when Joe, a young American photo-journalist, takes one of the most memorable pictures in history – an unknown man in front of one of the tanks at the protests in Beijing. Fast-forwarding to 2012, Joe finds a cryptic message in a Beijing newspaper which propels him to look for the unknown soul he captured on film. Could he still be alive? And where is he? Soon, Joe becomes obsessed with finding the unnamed man and begins a thrilling journey across the continents.

Directed by Lyndsey Turner, Chimerica features a rotating set design by Es Devlin, as well as lighting design by Tim Lutkin, sound design by Carolyn Downing, video design by Fran Ross, costume by Christina Cunningham and movement by Georgina Lamb. A touching tale about idealism, obsessions and love, Chimerica is the profoundly moving depiction of human nature which has captured the hearts of London audiences. Playing at the Harold Pinter Theatre until October 19th, Chimerica runs for a strictly limited season.

Special notice: Not recommended for young children. Chimerica is the smash-hit play that has captured the hearts of audiences across the city. A stunning new play that should be seen by all!

Sorry this show closed 16 October 2013, we recommend these similar productions.

SeatPlan Recommends: Seats at the Harold Pinter Theatre offer relatively good views. Be aware that there are several support pillars placed throughout the auditorium, so seats towards the rear of each section may have restricted views.