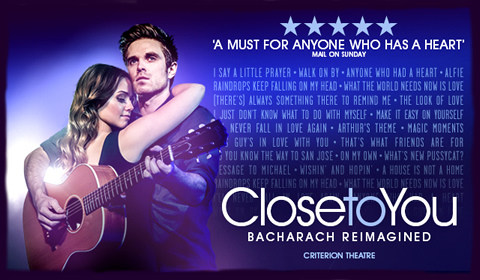 Close To You tickets

Criterion Theatre
30 seat views
Close to You is the brainchild of Kyle Raibko, whose prodigious musical talent is showcased in this reimagining of Burt Bacharach’s legendary back catalogue. Around 30 of Bacharach’s classic songs are mashed-up, re-arranged and revolutionised over the course of this intimate concert show.
This critically acclaimed hit had its London premiere at the Menier Chocolate Factory before transferring to the Criterion Theatre in October 2015. Riabko is joined on stage by a company of talented musicians and singers who take us through the agony and ecstasy of the world’s best known pop songs including ‘I Say A Little Prayer’, ‘The Look of Love’, ‘Raindrops Keep Falling On My Head’ and ‘What’s New Pussycat’. Based in a sofa-filled loft with a music lounge atmosphere, the songs don’t follow a narrative but rather follow on from each other as if the group are just getting together for the fun of making great music.
The songs and characters are tied together with the agile choreography of Steven Hoggett’s direction. A founding member of the legendary physical theatre company Frantic Assembly, his most successful work includes The Light Princess (National Theatre), The Curious Incident of the Dog in the Night-time (West End) and Once (West End, Broadway).
Kyle Raibko’s score brings freshness to Bacharach’s work and offers it to a new generation of musical theatre-goers. He began his career touring with Delta Goodrem, John Mayer and Jason Mraz before landing leading roles in Spring Awakening and Hair.

Special notice: Fans of music from this era, including Dionne Warwick, Cilla Black and Dusty Springfield, will love Raibko’s wistful treatments of Bacharach’s music. Not to forget younger theatre-goers, the music is timeless and Hoggett’s movement adds a bit of showmanship to the concert set-up.

Sorry this show closed 14 February 2016, we recommend these similar productions.

SeatPlan Recommends: All levels of the theatre feel close to the stage in an intimate theatre like the Criterion. Beware of obstructions with pillars in both the Stalls and the Dress Circle. Stalls are not raked, so avoid sitting here if you might have problems seeing over other audience members’ heads!