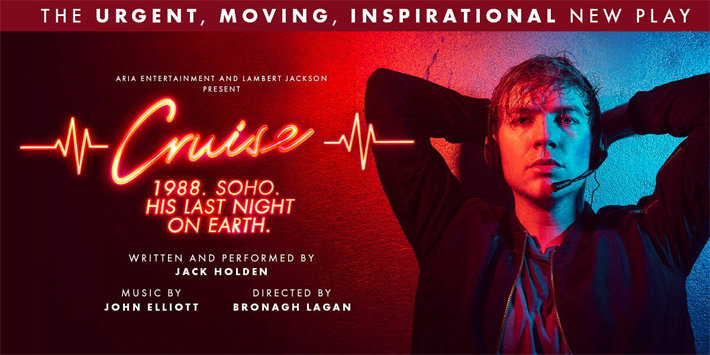 A vibrant tribute to the LGBTQ community

Jack Holden’s vibrant, award-nominated tribute to queer culture and those who lived through the AIDS crisis returns to London this year. Cruise is the story of a generation, refracted through one man’s last night on earth.

Michael’s life is meant to end on 29 February 1988. Diagnosed with HIV in 1984, he lost his partner Dave two years later and now isn’t expecting to see another morning. But when the clock keeps ticking and Michael is still alive, he has to face a new challenge. After living every day as if it’s his last, what will he decide to do with his future?

Based on a true story, Cruise is written by and stars Jack Holden (War Horse), with Bronagh Lagan directing. The show features a soundtrack of ‘80s hits, performed live by John Patrick Elliott. The initial Cruise West End run in 2021 was met with glowing reviews, and the show was nominated for the Best New Play Olivier Award.

Cruise play tickets take audiences on a rollercoaster of emotions as its protagonist travels through one night in Soho and shines a light on LGBTQ history. This incredible one-man show runs for a limited season at the Apollo Theatre.

Special notice: This production contains adult themes, including references to self harm.

Cruise seat view photos show what view you will get for your money. Our users will start adding seat views when the show opens.