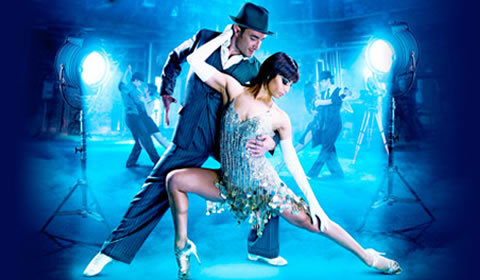 Aldwych Theatre
4 seat views
Following the success of Midnight Tango, Strictly Come Dancing’s Vincent Simone and Flavia Cacace return to the West End with their new show Dance ‘til Dawn. Opening in October 2014, the show will play at the Aldwych Theatre before continuing on a national tour.

Featuring a huge variety of dance, from the Foxtrot to the Argentine Tango, Dance ‘til Dawn is directed and choreographed by the Olivier Award-winning choreographer Karen Bruce and is co-choreographed by Cacace and Simone. Set in the midst of a movie shoot on a studio backlot, a romance blossoms between Sadie Strauss and Tony DeLuca. When leading man Bobby Burns is murdered and a plot is formed to frame Tony, the pair are forced to quite literally dance their way out of trouble.

With a book by Ed Curtis, the show fuses Big Band hits such as ‘Feeling Good’, ‘Moon River’ and ‘Stand By Me’ with dance, romance and comedy to bring the audience the seductive glamour of 1940’s Hollywood.

Nominated for an Olivier Award in the Best Entertainment and Family category, the show features set design by Morgan Large, lighting design by James Whiteside and sound design by Richard Brooker.

Special notice: Fans of Strictly Come Dancing will adore this dance-heavy show, which is suitably family-friendly. Big Band fans will adore the combination of 1940’s glamour and songs.

Sorry this show closed 03 January 2015, we recommend these similar productions.

SeatPlan Recommends: Being a dance-heavy production, the best place to sit would be the middle of the Stalls or the front of the Dress Circle in order to see the fancy footwork involved.