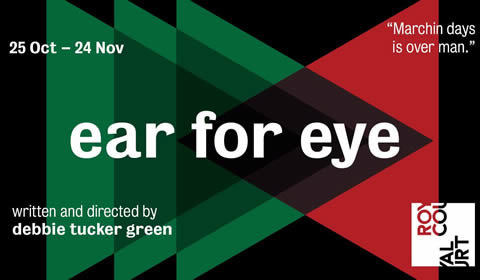 Award-winning playwright Debbie Tucker Green writes and directs a new play for the Royal Court 2018 season. A pertinent production about the ever-changing society, a lack of progress and growing race issues, Ear for Eye runs for a strictly limited season at the London venue.

Patience is running out and times have changed. Sometimes, progress just isn’t enough. Black British, African American, here, there, now. Change doesn’t care, it’s going to do its thing with or without you.

With casting yet to be announced, Ear for Eye comes as part of a season that celebrates new writing on topical issues, with productions featuring contemporary plays such as Instructions for Correct Assembly by Thomas Eccleshare, Pity by Rory Mullarkey and Mark Ravenhill’s The Cane.

Debbie Tucker Green is a multi-award winning playwright, whose credits at the Royal Court include a profoundly affectionate, passionate devotion to someone (-noun), hang, truth & reconciliation and random. With work spanning across stage, screen and radio, Tucker Green is the winner of a BAFTA for Best Single Drama and the Olivier Award for Most Promising Newcomer.

Ear for Eye plays a strictly limited run at Jerwood Downstairs at the Royal Court Theatre. A sharp commentary on the current social and political climate, the production runs from 25 October to 24 November 2018, with a press night on 31 October 2018.

Special notice: Fans of new writing should attend the Royal Court 2018 season, and any avid theatregoer should take the opportunity to see an award-winning writer’s new work.

Sorry this show closed 24 November 2018, we recommend these similar productions.

Ear for Eye seat view photos show what view you will get for your money. Unfortunately we do not have any seat views for this show.

The first half lacked drama for me. I didn't enjoy it as much as hang or random. If you like poetry it's... More

The first half lacked drama for me. I didn't enjoy it as much as hang or random. If you like poetry it's definitely worth seeing.