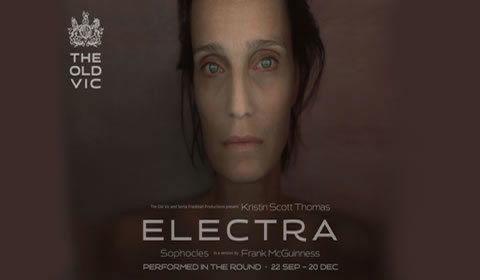 Old Vic Theatre
0 seat views
Acclaimed director Ian Rickson reunites with Kristin Scott Thomas to bring an exhilarating version of Sophocles’ epic tragedy Electra to the stage, opening in the round at the Old Vic Theatre. In a charged adaptation by Frank McGuinness, Electra is the classic Greek drama that follows Electra and Orestes as they exact revenge after their father’s fateful death.

Grief-stricken after the horrifying murder of her father Agamemnon, Electra becomes entirely consumed by the thought of exacting revenge on her father’s killers. With no desire to forgive, Electra’s anger builds, and once her brother Orestes returns, Electra’s fiery fury explodes without mercy, leading to a bloody and terrifying conclusion.

Ian Rickson’s directing credits include Old Times, Mojo, Betrayal, The Seagull and Jerusalem amongst many others. Electra features design by Mark Thompson, lighting design by Neil Austin, sound design by Simon Baker, choreography by Maxine Doyle and music by PJ Harvey. Staged in the round at the Old Vic Theatre, Electra is the epic Greek tragedy that promises a horrifying climax, opening for a limited time in September until December 2014.

Special notice: Electra is the well-known Greek tragedy that promises a very bloody climax which may not be suitable for children. Please note that latecomers will absolutely not be admitted, and the production has no interval.

Sorry this show closed 20 December 2014, we recommend these similar productions.

SeatPlan Recommends: Sit in the mid-front of the Stalls for the best overall view of the stage. There can be some bargain seats in the higher tiers, but be aware of safety rails obstructing the view.

Nobody has added a seat view photo for Electra at Old Vic Theatre yet, please be the first to share your experience.
Your basket is empty.