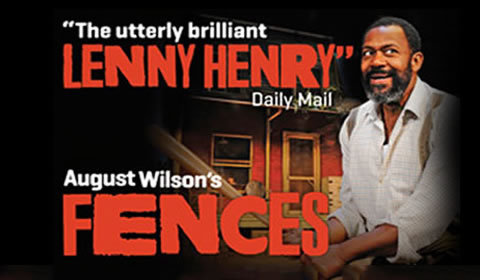 Duchess Theatre
0 seat views
After a triumphant return to the stage in Othello, Lenny Henry takes on the leading role in August Wilson’s Pulitzer Prize and Tony Award-winning play Fences. Considered to be one of the 20th century’s most poignant dramas, Fences is the touching story about a man robbed of his dreams. Originally premiering on Broadway in 1987, the play scooped four Tony Awards, including Best Play, with its 2010 Broadway revival garnering a further three.

Set in 1950’s Pittsburgh between the Korean and Vietnam wars, race relations are gradually evolving across America. Following Troy Maxson, a middle-aged man who has spent his life working as a bin man to provide for his family, we discover that he was once a talented athlete who was denied his chance due the colour of his skin. Resentful of a life he believes he was denied, Troy takes his anger out on his loyal wife and sports-obsessed son by building a fence that will keep his family in and the outside world out.

Stage and screen legend Lenny Henry stars as Troy in his first appearance since his acclaimed performance as Othello. Further stage credits include Comedy of Errors at the National Theatre. He is joined by Tanya Moodie (Sherlock), Colin McFarlane, Peter Bankole and Ashley Zhangazha. Fences originally starred James Earl Jones and Mary Alice and was revived in 2010 starring Denzel Washington and Viola Davis.

Special notice: Fences is not suitable for young children due to themes of strong language and violence. Those who enjoy hard-hitting dramas will enjoy this topical play.

SeatPlan Recommends: Seating at the Duchess Theatre ensures great views, specifically in the Stalls. Sit in the middle and centre for the very best view of the entire stage.