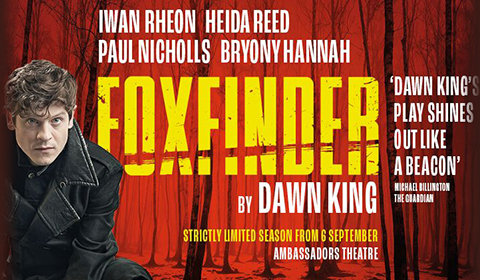 Ambassadors Theatre
22 seat views
Olivier Award-winning Game of Thrones actor Iwan Rheon stars in the West End premiere of Dawn King’s dark thriller Foxfinder at the Ambassadors Theatre. Playing a limited season, the award-winning drama is set in a dystopian world where England’s harvests are in crisis, and foxes are the primary source of corruption and infestation.

Judith and Samuel Covey’s harvest has failed to meet government targets and trained “Foxfinder” William Bloor is tasked with hunting the animals out and eradicating them for good. However, when he arrives at the couple’s farm, he begins to realise that more questions are arising than answers. After all, how far can you believe something before you begin to question it?

First seen at the Finborough Theatre in 2011, the production was named one of The Independent’s top five plays of the year, going on to earn the Papatango New Writing Prize in the same year. Writer Dawn King later went on to win the National Theatre Foundation Playwright Award in 2013.

Iwan Rheon stars as William Bloor. Best-known for his role on HBO’s Game of Thrones, his extensive screen credits include E4’s Misfits, The Artist, Our Girl and Viscous. He was the recipient of the 2010 Olivier Award for his role as Moritz in Spring Awakening, and he has also appeared in the Royal Court’s Remembrance Day.

Rachel O’Riordan directs the production, after recently winning the Olivier Award for Killology at the Royal Court. Foxfinder also features design by Gary McCann and lighting design by Paul Anderson, with sound design and compositions by Simon Slater.

An award-winning drama that promises plenty of suspense, thrills and comedy, Foxfinder plays a strictly limited season at the Ambassadors Theatre. The production runs at the London venue from 6 September 2018 to 5 January 2019, with a press night on 13 September 2018.

Special notice: Those familiar with Iwan Rheon’s work should take the chance to see him return to the stage, whilst fans of dark, intense thrillers would thoroughly enjoy this award-winning production.

Foxfinder seat view photos show what view you will get for your money. Unfortunately we do not have any seat views for this show.