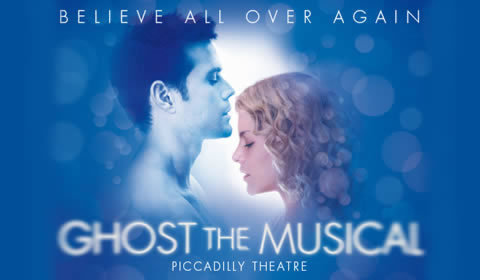 Piccadilly Theatre
7 seat views
Revamped for the stage from the hugely successful Oscar Award-winning film of the same name, starring Demi Moore and Patrick Swayze, Ghost the Musical is a multi-technological stage sensation. Making its West End debut after an initial run in Manchester, the musical opens at the Piccadilly Theatre, as well as the Lunt-Fontanne Theatre on Broadway.

Ghost tells the same story as the critically-acclaimed film, focusing on the tragically heart-wrenching story of Molly and Sam. A young, loved-up couple, things take a shocking turn when Sam is murdered on a night out. Unable to make peace with his untimely end, Sam becomes a ghost and follows his heartbroken lover, unbeknownst to her. Molly is consoled by the couple’s mutual friend, Carl, however on closer inspection Sam discovers that he may be less of a friend than he first thought.

Adapted for the stage by Bruce Joel Rubin, Ghost includes music by Dave Stewart and Glen Ballard, who also collaborated on the lyrics alongside Rubin. The production was nominated for five Olivier Awards and three Tony Awards, with nods for Best New Musical and Best Sound Design. Rubin, Stewart and Ballard’s score includes a cover of the iconic Righteous Brothers’ ‘Unchained Melody’, as well as stand-out original numbers such as ‘Three Little Words’, ‘With You’, ‘Rain/Hold On’ and ‘The Love Inside’.

Special notice: Ghost contains scenes of an adult nature as well as scenes depicting violence, therefore it is not suitable for children.

Sorry this show closed 06 October 2012, we recommend these similar productions.

'Ghost' is a beautiful show - both for its music and the advancement of technological achievements and... More

'Ghost' is a beautiful show - both for its music and the advancement of technological achievements and illusions on stage. Moments such as Sam putting his hand through the door just seem to happen before your eye, and make you believe the story even more. A wonderful must see show that will guarantee to have tears flowing at the end.