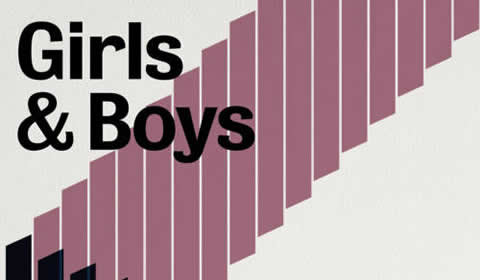 Royal Court Theatre
17 seat views
Award-winning playwright Dennis Kelly brings his new one-woman play Girls & Boys to the Royal Court in 2018. Beginning with an unexpected airport encounter, the story follows the first meeting of a couple, before they inevitably fall in love and settle down. Their lives are as ordinary as any other pair, until things take a dark turn and begin to go rapidly downhill.

Dennis Kelly is best known for writing the book for the RSC and Tim Minchin’s smash-hit Matilda the Musical, which earned him a Tony, Olivier, Critics’ Circle and Evening Standard Theatre Award. Previous work for the Royal Court includes The Ritual Slaughter of Gorge Mastromas, with further plays include Love and Money and DNA. One of the country’s most versatile playwrights, his work has been staged at the National Theatre, the Old Vic, Southwark Playhouse, the Donmar Warehouse and Soho Theatre.

Girls & Boys marks the first time that Kelly teams up with director Lyndsey Turner, best known for her smash-hit production of Hamlet, starring Benedict Cumberbatch. Other notable credits include Posh at the Royal Court, which later transferred to the West End, as well as Chimerica at the Almeida Theatre, Machinal on Broadway and Edgar & Annabel at the National Theatre.

Multi-award winning actress Carey Mulligan stars as Woman, returning to the theatre where she made her stage debut at the age of 19. Since then, she has garnered acclaim on both stage and screen. Theatre credits include Skylight both in the West End and on Broadway, whilst extensive screen credits include starring opposite Leonardo DiCaprio in the 2013 film of The Great Gatsby, as well as Suffragette, Far from the Madding Crowd and Northanger Abbey.

The production features design by Es Devlin, costume design by Jack Galloway, lighting design by Oliver Fenwick and sound design by David McSeveney. Girls & Boys runs from 8 February to 10 March 2018. This strictly limited run will undoubtedly be popular due to the cast and creative team on board.

Special notice: New writing devotees will be thrilled by Dennis Kelly’s latest play, whilst Carey Mulligan fans and those interested in seeing new work in an intimate venue should not miss out.

Sorry this show closed 17 March 2018, we recommend these similar productions.

Girls & Boys seat view photos show what view you will get for your money. Unfortunately we do not have any seat views for this show.

The show was absolutely stunning- it started off very funny but slowly got darker and darker and... More

Carey Mulligan is excellent in this one woman show and had the audience eating out of the palm of... More

Carey Mulligan is excellent in this one woman show and had the audience eating out of the palm of her hand. How she captivated us all for 90 mins with this excellent script written by Dennis Kelly was amazing. I found myself crying with laughter, crying with tears and everything in between. If you can get a ticket for this then please do so, you will not be disappointed. She is excellent in this role.

A wonderful production of a new play that has plenty of humour early on, but changes tonally to u... More

A wonderful production of a new play that has plenty of humour early on, but changes tonally to ultimately pack a very powerful punch. Excellent performance by Carey Mulligan.