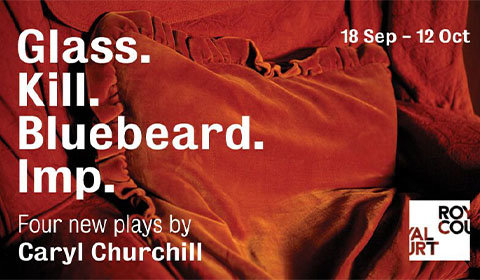 Royal Court Theatre
9 seat views
In her first West End outing since 2016, acclaimed playwright Caryl Churchill returns to the Royal Court with four new stories, Glass. Kill. Bluebeard. Imp. In these stories, Churchill will introduce audiences to a girl made of glass, gods and murders, a serial killer’s friends, and a secret in a bottle.

Caryl Churchill’s career spans decades and is marked by a longstanding relationship with the Royal Court. From her first professional stage production premiering in 1972 to her most recent effort Escaped Alone opening at the Sloane Square venue, many of her plays which first premiered at the Royal Court are now considered classics, including Top Girls, A Number and Far Away.

Director James Macdonald has collaborated frequently with both the Royal Court and with Caryl Churchill, and has most recently worked with the Court on One For Sorrow, The Children, Escaped Alone and The Wolf From The Door.

The latest offering from one of British theatre’s modern greats, Glass. Kill. Bluebeard, and Imp. runs at the Royal Court from 18 September 2019.

Special notice: Any fans of Caryl Churchill’s extensive catalogue will be keen to catch her latest writing, as will those interested in seeing work from one of Britain’s modern greats.

Sorry this show closed 12 October 2019, we recommend these similar productions.

Glass. Kill. Bluebeard. Imp. seat view photos show what view you will get for your money. Unfortunately we do not have any seat views for this show.

Fascinating and imaginative plays, exquisitely staged and really well acted. Wonderful short plays from one of the greatest living playwrights.

Four short plays in rapid succession, they have no titles (as has happened here before) to tell you the... More

Four short plays in rapid succession, they have no titles (as has happened here before) to tell you the names as you switch. The themes are quite obvious, though. My particular favourite was the first - Glass has four people playing on a lit, elevated ledge; they represent glass ornaments on a mantelpiece, having a series of conversations. I love the idea. While they set up for Kill, you get a juggler to distract you while they hammer away behind the curtain. Fair play to her, the smile never faltered - despite her dropping the clubs three times, once into the front row, where a nice man handed it back to her. When she heads off, the curtain opens to reveal a chap sat on a wispy cloud. This turns out to be a Greco-Roman god, musing on the shenanigans of the mortals down below, and constantly reminding us that the humans invented the gods, and "we don't exist". Quite matter-of-fact about it, he is. Lights a cigarette whose smoke merges with the cloud wisps. And has quite an hilarious speech to make about a convoluted proverbial Greek tragedy, and which bits of it the gods approve of, and which they don't. More circus performance between plays - nothing was dropped the second time, though. The final piece before the interval is Bluebeard, where a number of Bluebeard's friends gather in shock after all his nefarious actions are revealed, to discuss what happened, and the fallout, and to reiterate how they had no idea! Mind you, there's opportunity in misfortune.. After the interval, we get Imp, where an elderly couple - cousins - get visits from a young relative, and another young chap who comes into their lives. Brightens the day for them y'know? But one of the cousins has this thing about this empty wine bottle she keeps to the side - seems it has an imp in it, which she can turn to for wishes when all else fails. Just as well.. Very interesting, recommended.