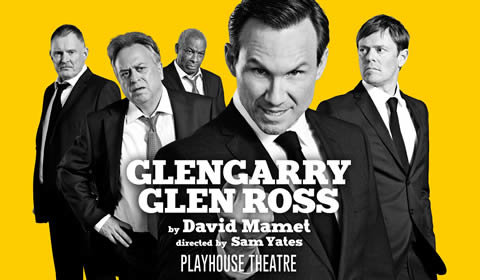 Lies, greed and corruption are all part of the game. Set in a high-pressure, cut-throat Chicago office, a group of salesmen are willing to go to any lengths to secure a deal. Whether legal or not, they are determined to push as much real estate as possible. But as time and luck begins to run out, one thing becomes painfully clear. Close the deal and you’re a winner. Lose the lead and you’re out.

Christian Slater, well-known for his appearances in Heathers and Mr Robot, returns to the West End for the first time since starring in the acclaimed 2004 and 2007 productions of One Flew Over the Cuckoo’s Nest. Further casting includes Kris Marshall (Love Actually, Death in Paradise), Don Warrington (Death in Paradise), Robert Glenister (Hustle, Law & Order: UK) and Stanley Townsend (Florence Foster Jenkins).

Originally premiering at the National Theatre in 1983, directed by Bill Bryden, Glengarry Glen Ross went on to receive its Broadway premiere in the following year. After receiving tremendous critical acclaim, the production received every major theatre award, including the 1983 Olivier Award for Best Play and the 1984 Pulitzer Prize for Drama.

Sam Yates directs the production, with previous credits including Murder Ballad at the Arts Theatre and East is East at Trafalgar Studios. From the writer behind plays including American Buffalo and Speed-the-Plow, Glengarry Glen Ross is a pertinent play that remains startlingly relevant at a time when the debate of the American Dream is under fierce scrutiny.

Featuring an all-star cast, Glengarry Glen Ross plays a strictly limited season at the Playhouse Theatre. The production runs from October 26th 2017 to February 3rd 2018, with an official press night on November 9th 2017.

Age recommendation: Not suitable for under 12's

Special notice: Fans of David Mamet’s work will enjoy this major revival of one of his most celebrated plays, making it one of the hottest tickets in the West End. Featuring a star-studded cast, this is a one-off opportunity to catch it in the West End. Those who enjoyed American Buffalo with Damian Lewis should be sure to get tickets to this fantastic show too.

SeatPlan Recommends: Seats throughout the Playhouse Theatre offer mixed views, with the best overall tickets being available centre-front of the Stalls. Due to the limited height of the stage, you can see everything even up close, and it is recommended to get tickets here or in the front of the Dress Circle for the best views.

Those who are hunting for bargains should aim for the Upper Circle, although views may seem high and distant. It’s also a good option to get tickets at the rear of the Stalls!

Glengarry Glen Ross saw some very fine acting performances, particularly from Christian Slater and Stanley Townsend. I was however shocked to learn that first act was only 35 mins in length. Just as I was getting into the play, the interval happened. The second act is only 50 mins so it's very short overall. I found the play to be quite hurried and rushed and not up to the same standard as the excellent movie. However, the acting and writing were top quality so worth seeing from that perspective!

Superb stage play. Everyone was on form. Sharp delivery, energy, and pace. The time just whistled by.... More

Superb stage play. Everyone was on form. Sharp delivery, energy, and pace. The time just whistled by. The real star of this though, wasn’t Christian Slater, it was Stanley Townsend awesome performance as Shelley Levene.

Great writing, christian slater was great. It didn't need an interval at all, they should have pushed... More

Great writing, christian slater was great. It didn't need an interval at all, they should have pushed though to make it just one act of 90 mins.

The play itself, though very good, is short and loses something of the character and plot development... More

The play itself, though very good, is short and loses something of the character and plot development it could otherwise have. Also, it ends quite abruptly and I felt that another scene should surely follow. But the performances were excellent from all the cast, and so well worth seeing!

The play was very good. Christian Slater was brilliant and the rest of the cast were pretty good too. More

The play was very good. Christian Slater was brilliant and the rest of the cast were pretty good too.

Liked it but initial monologues a bit boring - but positioned the story. Second half was good. Very short.... More

Liked it but initial monologues a bit boring - but positioned the story. Second half was good. Very short. Recommend this as long as someone OK with a lot of swearing and wordy play. Overall a good and interesting play.