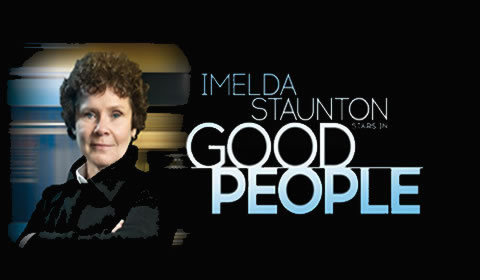 Noel Coward Theatre
1 seat views
Olivier Award-winning actress Imelda Staunton stars in David Lindsay-Abaire’s hilariously cutting Good People for a limited ten week run at London’s Noel Coward Theatre. After premiering on Broadway in 2011, this darkly comic play makes its way to the West End following an acclaimed, sell-out run at the Hampstead Theatre. Tackling issues of class and the American economy all with a dash of good humour, Good People is a thrilling human drama.

Set in South Boston, Good People follows sharp-tongued single mother Margie, who loses her job and will do anything it takes to pay the bills. Just making ends meet on her side of town is difficult, and Margie is no stranger to using all her energy to keep afloat. When hearing than an old, wealthy lover is back in town, she decides to corner him with hilarious, disastrous and entirely unexpected consequences.

Multi-award winning actress Imelda Staunton plays Margie, opposite Lloyd Owen as Mike. Staunton was most recently seen onstage in Circle Mirror Transformation and Sweeney Todd, for which she received the Olivier Award for Best Actress in a Musical. She is also well-known for her film credits, which include Pride, Maleficent, Harry Potter and Vera Drake. Lloyd Owen is known for stage credits including The Bodyguard and Stuff Happens. Further casting includes Lorraine Ashbourne as Jean, Matthew Barker as Stevie, Angel Coulby as Kate and June Watson as Dottie.

Running time: Running time is approximately 2 hours and 5 minutes including a 20 minute interval

Special notice: Imelda Staunton fans will enjoy seeing her in this fabulously witty role, supported by a top-notch cast. Those who enjoy gritty dramas will find this thoroughly engaging, as it is also packed with light relief. Good People may not be suitable for young children.

Sorry this show closed 14 June 2014, we recommend these similar productions.

SeatPlan Recommends: Sit in the mid-front of the Stalls for the best overall view of the Noel Coward stage. Be aware that seats in the highest tiers may be quite restricted, but can also offer some great bargains.