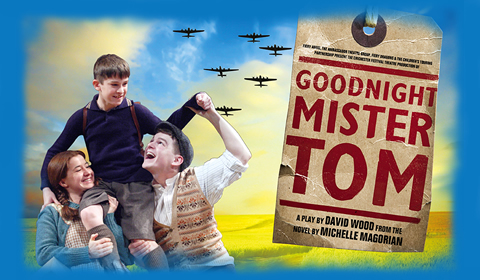 Duke of York's Theatre
6 seat views
Following a triumphant run throughout 2012 and 2013, the Olivier Award-winning production of Michelle Magorian’s Goodnight Mister Tom returns to the West End. In a story that is sure to pull at the heart strings, we follow the life of a young WWII evacuee as he is sent to the countryside to live with a mysterious recluse.
Taking us from London to Dorset and back again, Goodnight Mister Tom explores the unexpected friendship between William Beech and the elderly Tom Oakley. As their bond grows stronger, they each begin to comprehend the pain the other has suffered; William at the hands of his abusive mother and Tom with the loss of his wife and son. When William’s mother summons him back to blitzed London, his idyllic life in the country comes to an abrupt end and the strengths of his friendships are tested.
The stage adaptation of Magorian’s Guardian Children’s Fiction Prize winner is written by the acclaimed children’s playwright David Wood. Wood’s other work includes adaptations of Roald Dahl’s classics The BFG and The Witches as well as Judith Kerr’s book for young children, The Tiger Who Came To Tea, which also graces the West End stage this Christmas.
Angus Jackson (The Boy in the Striped Pyjamas, King Lear) directs an unsentimental but unabashedly touching version of the story that was critically acclaimed at the Chichester Festival. David Troughton takes on the role of Tom Oakley, previously appearing in countless productions at with the National Theatre and Royal Shakespeare Company as well as roles in Outnumbered, Doctor Who and David Copperfield on television.

Special notice: Fans of Magorian’s original book would love seeing it come alive on stage. David Wood was named by The Times as ‘The National Children’s Dramatist’ and children of all ages will find something to love in his delightful play.

Sorry this show closed 19 February 2016, we recommend these similar productions.

SeatPlan Recommends: The Duke of York's is a small theatre with a very deep horseshoe-shaped curve, which means views from the end of rows in the Royal Circle and Upper Circle are very restricted. This is especially the case with younger audience members! So be sure to select somewhere in the middle of the seating sections for the best views possible.