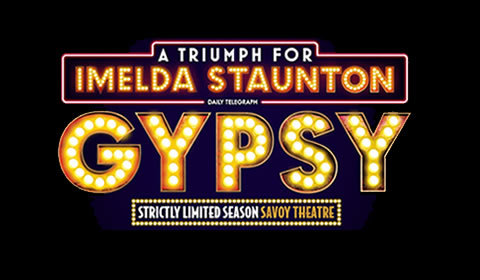 Theatre, film and television stars, Imelda Staunton and Lara Pulver reprise their roles as Momma Rose and Gypsy Rose Lee. Both have continued to win praise by critics and the public alike who have applauded the pair for their powerhouse performances on countless occasions.

Based on a true story, Arthur Laurents’, Jule Styne’s and Stephen Sondheim’s Gypsy is widely considered to be one of the best musicals to have ever graced Broadway.

The show tells the tale of a stage mom who pushes her two daughters, Louise and June, into the world of showbiz. Alongside a rabble of children Momma Rose has coaxed into her troupe, Louise and June are expected to deliver show stopping song and dance numbers, with their mother seeing June as the act’s true star. Despite her mother pining all her hopes on June’s ability to perform, the troupe struggle to make a living. Things get even more complicated when the youngsters grow up and wish to go their own way, much to the resentment of Momma Rose.

Gypsy is a theatrical treat for the eyes and the ears, with some fantastic set and costume by Anthony Ward, plus expert choreography by Stephen Mear which both work to compliment Styne and Sondheim’s beloved music.

Stand out show songs include “You Gotta Get A Gimmick,” “Let Me Entertain You,” and the boisterous “Roses Turn.”

Gypsy is running until the 28th November at the Savoy Theatre. Book tickets to what critics have hailed as the theatrical event of the year!

Running time: 2 hours and 50 minutes including an interval

Special notice: Gypsy is a classic book musical and is recommended for those who love a traditional Broadway show. There are some scenes of moderate nudity, so the show is unsuitable for young children.

Sorry this show closed 25 November 2015, we recommend these similar productions.

SeatPlan Recommends: There is a moment in the show in which a catwalk is used (Act 2) to get the best view of the action on this section of the performance area, we would recommend sitting in the first few rows of the Stalls.