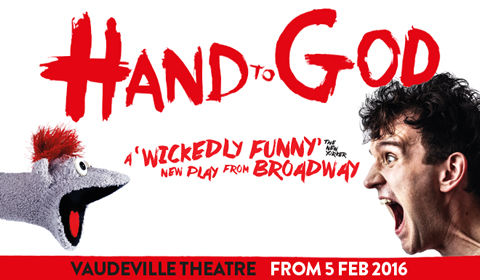 Directed by newcomer Moritz von Stuelpnagel, Hand to God follows Jason and his mother Margery as they come to terms with the loss of Jason’s father. Set in suburban Texas, Margery organises a puppetry workshop at Pastor Greg’s Church which is attended by three teens. When Jason is encouraged to express himself through his sock puppet, he is unaware of just how much he has brought the terrorising Tyrone to life. Soon, Tyrone takes over, spouting blasphemous foul-mouthed truths at everyone his path, with hell-raising and chaotically hilarious results.

Harry Melling, who is best-known for his role as the demanding Dudley Dursley in the Harry Potter film series, stars as both Jason and Tyrone, morphing quickly from one role to the next. Olivier Award-winning actress Janie Dee (The Seagull, Celebrations) plays Margery, alongside Neil Pearson (Waterloo Road, Bridget Jones) as Pastor Greg, Jemima Rooper (Blithe Spirit, One Man, Two Guvnors) as Jessica and Kevin Mains (Cilla) as Timothy. Hand to God also includes design by Beowulf Boritt, costume by Sydney Maresca, lighting design by Jason Lyons and sound design by Jill BC Du Boff. Puppet design is by Marte Johanne Ekhougen, with complicated fight direction by Robert Westley.

Special notice: Fans of Avenue Q and The Book of Mormon will find a very similar humour here. This production contains extremely strong language and violent content, which is not suited to children.

SeatPlan Recommends: The Vaudeville Theatre is intimate, with excellent views from all sections. For a perfectly clear, unrestricted view on a budget, choose any seat in the Dress Circle. Be aware that there are obstructing support pillars throughout the auditorium.