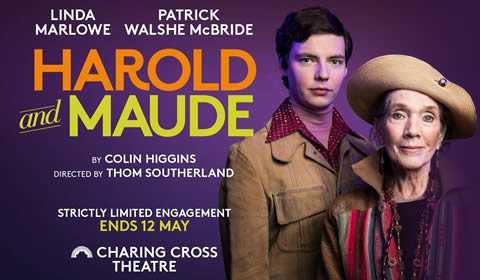 Charing Cross Theatre
18 seat views
Stage veteran Linda Marlowe returns to the West End to star in Colin Higgins’ 1970’s dark comedy Harold and Maude, taking over the role from Sheila Hancock Playing an extended season at the Charing Cross Theatre, it marks the first ever London production of the play, which sees a very unlikely pair come together by chance.

Originally a 1971 comedy starring Hal Ashby and Ruth Cordon, the film was nominated for two Golden Globe Awards. A unique, romantic story, Harold and Maude focuses on two polar opposites: a self-destructive, compulsive, young 18-year old, who attends funerals for fun and stages his own suicides, and a wild and bohemian older lady who is determined to live life to the fullest.

When Harold Parker Chasen attends the same funeral as Dame Marjorie “Maude”, this is the catalyst for an unlikely relationship. As Harold embraces Maude’s free spirit, he begins to discover the joy in living. Part comedy and part romance, the enigmatic play sees the lines of class, gender and age blurred.

Linda Marlowe stars as Maude, having most recently appeared at the Charing Cross Theatre in In the Bar of a Tokyo Hotel. With multiple stage credits to her name, Marlowe is best-known for her 25-year association with Steven Berkoff, starring in shows such as No Fear and the award-winning Berkoff's Women.

The hilarious and heart-warming production plays a newly extended season from April 2nd to May 7th 2018, with a press night on April 9th 2018.

Special notice: Those who love the original film should take the opportunity to see the stage adaptation, which brings to life the quirky characters.

Sorry this show closed 12 May 2018, we recommend these similar productions.

SeatPlan Recommends: Seats throughout the Charing Cross Theatre offer good views, particularly in the centre-front of the Stalls. Sitting centrally allows for a great overall view of the stage, although seats toward the ends of rows may be discounted and great bargains.

Sit in the Balcony if you are on a tight budget, however be aware that views are side-angled and not the most comfortable.

A moving play with a hippy message about living life to the full. Plenty of laughs but the blossoming... More

A moving play with a hippy message about living life to the full. Plenty of laughs but the blossoming romance between the lonely teenage boy and 80-year-old woman is handled sensitively. I was in seat 1 on the right balcony, and when Sheila Hancock climbed a ladder (tree) as part of the play, her face was just six feet away from me. A lovely small, intimate theatre.

I loved everything about this show. You walk in and see the set which has the most creative design and... More

I loved everything about this show. You walk in and see the set which has the most creative design and angles. It works with the play beautifully creating depth at the back of the stage when needed. The costumes are of the 1970’s when the film was made and Maude wears some lovely colourful outfits. No spoilers here but the creativity of the show was mind blowing. I was in awe with how they put across some aspects. The whole cast were incredible and the interaction between the various characters, which doubled up as musicians was sheer brilliance. I don’t normally name actors in my reviews because I go to see the show and not the big names, but I have to mention the beautiful relationship Bill Milner and Sheila Hancock created on stage. I was aware this play might not live up to the film which I adore, but it did not disappoint me in any way and their relationship was delightfully portrayed. I highly recommend seeing this, especially if you enjoy dark humour. I held my camera a bit low down so please bear in mind the view is better than my photo!

It was a funny, but touching play. Great performances from the two leads in particular.