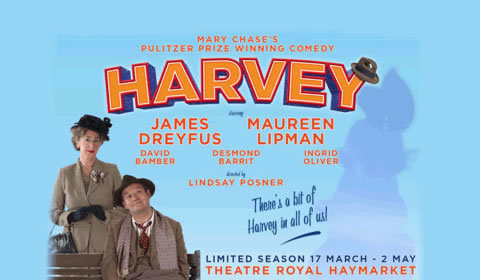 Theatre Royal Haymarket
5 seat views
Lindsay Posner (Uncle Vanya, Relatively Speaking) directs a hilarious new production of Pulitzer Prize-winning comedy Harvey at the Theatre Royal Haymarket. Written by Mary Chase, Harvey is the quirky tale of a man and his imaginary rabbit which was made into a 1950’s classic film starring James Stewart. First opening on Broadway 1944, Harvey makes its way to the West End.

Chase’s hugely funny story follows Elwood P Dowd, who has an unwavering friendship with a six foot tall invisible rabbit named Harvey. In an attempt to save their family’s crumbling reputation, Elwood’s sister Veta takes him to see psychiatrist Dr William Chumley. But then Dr Chumley accidentally commits anxiety-ridden Veta instead of her brother, a whirlwind of catastrophic events ensue, as the community try their best to catch a man and his invisible rabbit.

Olivier Award-winning actor James Dreyfus stars as Elwood P Dowd, who is well-known for his stage credits which include Lady in the Dark, The Producers and Cabaret. Dreyfus is perhaps best-known for his extensive screen credits such as Gimme Gimme Gimme, Notting Hill and The Thin Blue Line, for which he received a British Comedy Award. He is joined by Olivier Award-winning actress Maureen Lipman, who has starred in productions such as Oklahoma!, Thoroughly Modern Millie and Daytona. Further cast members include David Bamber as William R. Chumley, Desmond Barrit as Judge Omar Gaffney, Felicity Dean as Betty Chumley, Ingrid Oliver as Myrtle Mae Simmons, Amanda Boxer as Miss Ethel Chauvenet, Sally Scott as Nurse Ruth Kelly, Yousseff Kerkour as Duane Wilson, Jack Hawkins as Lyman Sanderson and Linal Haft as E J Lofgren.

Directed by Posner, Harvey features lighting design by Howard Harrison and sound design by Paul Groothius. A touching tale that is sure to bring plenty of laughs, Harvey opens at the Theatre Royal Haymarket for a limited season beginning in March 2015.

Running time: 2 hours and 20 minutes including an interval

Special notice: Fans of comedy will enjoy this hilarious story, which is quite unlike anything else on the West End. It’s also a great opportunity to see two Olivier Award-winning actors on stage!

Sorry this show closed 02 May 2015, we recommend these similar productions.

SeatPlan Recommends: Seats in the Theatre Royal Haymarket offer generally good views, although it would be best to sit in the mid-front of the Stalls for the best view!