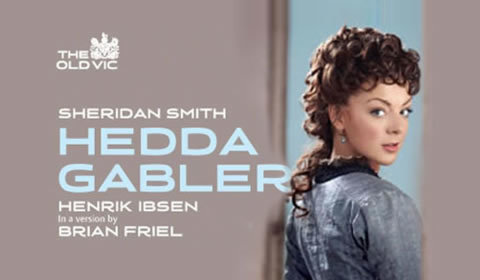 Old Vic Theatre
0 seat views
Olivier Award-winning actress Sheridan Smith stars in a major new production of Henrik Ibsen’s masterpiece Hedda Gabler, in a new adaptation by Irish playwright Brian Friel. Directed by Anna Mackmin, Hedda Gabler is the seminal play about the conflict between the requirements of society and those of the individual, which remains startlingly relevant to this day.

Played out over 24 hours, Ibsen’s classic follows the free-spirited Hedda Gabler who chooses to rally against a life of crippling convention. Spending her married life struggling between the boundaries of expectation and reality, Hedda is subjected to a life of missed opportunities, ending with an ultimate tragic climax. Exploring themes of gender expectations, Hedda Gabler remains as relevant as when it was first published in 1890.

Sheridan Smith has quickly become one of the country’s most beloved actresses, receiving both the Olivier and Evening Standard Best Actress Awards for her performance in Flare Path, as well as the Olivier Award for Best Actress in a Musical for her acclaimed portrayal of Elle Woods in Legally Blonde. Beginning in the likes of Gavin & Stacey and Two Pints of Lager and a Packet of Crisps, Smith has since starred in Accused, Jonathan Creek and Mrs Biggs. Starring as the fated Hedda Gabler, Smith is joined by Buffy Davis as Bertha, Anne Reid as Juliana Tesman, Adrian Scarborough as George Tesman and Fenella Woolgar as Thea Elvsted, as well as Daniel Lapaine and Darrell D’Silva.

Hedda Gabler is directed by Anna Mackmin, who most recently directed Tom Stoppard’s The Real Thing, as well as Di and Viv and Rose and Me and My Girl. Brian Friel’s adapted production features design by Lez Brotherston, sound design by Simon Baker, lighting by Mark Henderson and original compositions by Paul Englishby. Starring Sheridan Smith, this revamped version of a classic opens at London’s Old Vic Theatre for a limited season.

Running time: 3 hours including an interval

Special notice: Not recommended for children, Hedda Gabler is suitable for those who enjoy gripping dramas. Fans of Sheridan Smith will delight in seeing her play a wholly serious role, quite unlike previous appearances! Those who enjoy the original text will find the adaptation does not stray far from the original!

Sorry this show closed 10 November 2012, we recommend these similar productions.

SeatPlan Recommends: Sit in the Stalls of the Old Vic Theatre for the best view of this intimate play. Be aware that restrictions are towards the rear of each section.

Nobody has added a seat view photo for Hedda Gabler at Old Vic Theatre yet, please be the first to share your experience.
Your basket is empty.