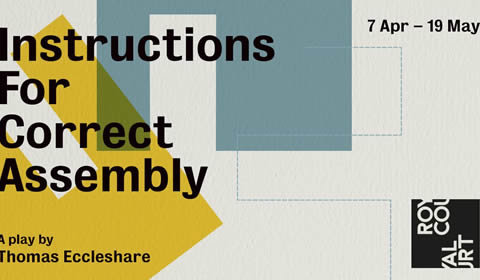 Writer Thomas Eccleshare makes his Royal Court debut with his latest play, Instructions for Correct Assembly, which plays a limited run as part of the venue’s 2018 season. A sharp take on technology, parenthood and genetic modification, the new production sees two adults give parenthood a second go.

Hari and Max were not satisfied with their first attempt at parenthood, so they’ve decided to give it another go. This time, they’re equipped with a detailed construction manual and handy 30-day money back guarantee. As long as they follow the guidelines step by step, the pair are certain that their little one is going to be absolutely perfect.

Instructions for Correct Assembly is the newest play by emerging award-winning writer Thomas Eccleshare, whose writing includes Schtum, commissioned by Channel 4, and Heather, which toured the UK before a sold-out run at the Bush Theatre. The production is directed by Royal Court Associate Director Hamish Pirie, whose credits at the theatre include Goats, Violence and Son and Teh Internet is Serious Business.

Further productions in the newly announced season include Rory Mullarkey’s Pity, Ear for Eye by Debbie Tucker Green and Mark Ravenhill’s The Cane. Instructions for Correct Assembly plays at the Royal Court Theatre from 7 April to 19 May 2018, with a press night on 13 April 2018.

Special notice: Those who enjoy new writing should visit this production, which touches on some very topical subjects. Fans of director Hamish Pirie’s previous works will recognise his signature style here.

Instructions for Correct Assembly seat view photos show what view you will get for your money. Unfortunately we do not have any seat views for this show.