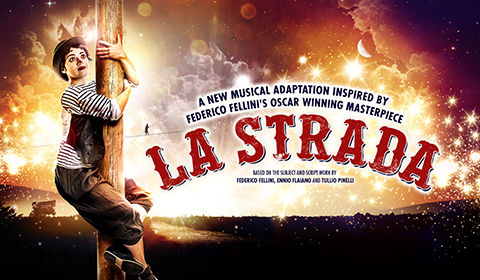 The Other Palace
8 seat views
Federico Fellini’s 1975 Oscar-winning film La Strada received a magical stage adaptation at the rebranded The Other Palace. La Strada is a the circus story, a visually stunning modern masterpiece of cinema.

Based on the subject and script work by Fellini, Ennio Flaiano and Tullio Pinelli, La Strada is the incredible story of Gelsomina, who is sold to a travelling sideshow strongman by her penniless mother. Together, Gelsomina and Zampano travel through the Italian countryside, performing at various shows to earn their keep.

When a dangerous road trip leads them to a ragtag travelling circus, the duo come across Il Matto, a mysterious tightrope walker. Soon, Il Matto reignites Gelsomina’s spirit with a fire and confidence that was long since lost. Featuring a multi-talented cast, mesmerising original music and enough emotion to stir the soul, La Strada is the ultimate story of friendship and acceptance.

Produced by Kenny Wax Ltd, La Strada is directed by Olivier Award-nominee Sally Cookson, who brought enchanting productions such as Hetty Feather and Jane Eyre to the stage. Opening at The Other Palace for a summer season, La Strada features original music by Benji Bower, design by Katie Sykes, lighting design by Aideen Malone and sound design by Mike Beer.

Acquired by Andrew Lloyd Webber, The Other Palace is rebranded from the St James Theatre to present new and rarely seen musical theatre. La Strada played at the venue from May 30th 2017 until July 8th 2017.

Special notice: Fans of enchanting storytelling will be enthralled with this story. Those who enjoy La Soiree will find a real story mixed in with the circus magic here!

La Strada is suitable for those aged 12 and up.

Sorry this show closed 08 July 2017, we recommend these similar productions.

SeatPlan Recommends: Sit anywhere in The Other Palace to have an excellent overall view of the stage! The first few rows will ensure a completely immersive experience.

Sit as centrally as possible, although seats at the ends of rows are still amazing value.

Those who want to see the show on a budget should choose the rear two rows in the theatre. Although there is limited legroom, the view cannot be beaten!