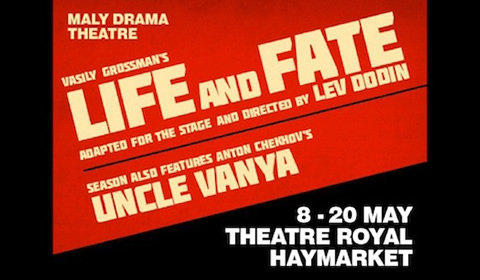 Theatre Royal Haymarket
0 seat views
Playing for a strictly limited engagement, multi-award winning company Maly Drama Theatre from, St. Petersburg, bring their renowned production Life and Fate to London for the first time. Touring the world since 2007, this production has won Russia’s national theatre award, the Golden Mask, for Best Play. This play will be performed in Russian with English surtitles.

Adapted from Vasily Grossman’s 1959 novel of the same name, the epic story is set in 1943 as Russian people suffer the effects of World War II. Focusing on the Battle of Stalingrad as framed by one family, all of Russia’s ailments are starkly exposed. The book was banned from publishing in Russia due to its comparisons between Nazism and Stalinism, but fellow Russian dissidents eventually published the book in 1980 in Switzerland, after Grossman’s death.

Founded in 1944, the Maly Drama Theatre is now considered one of Russia’s most important venues. From humble beginnings, when the company had no venue and had to tour towns in villages in the Leningrad area, the group have grown into a 56-member company, led by Artistic Director and teacher Lev Dodin, who has been in the position since 1982.

An extraordinary opportunity to see Russian theatre performed by its own creators, Life and Fate is presented alongside the company’s acclaimed interpretation of Uncle Vanya. Playing a strictly limited engagement at the West End’s Theatre Royal Haymarket, Life and Fate runs from 8 to 20 May 2018.

Life and Fate will be performed in Russian with English surtitles.

Special notice: WWII plays are fairly common, but not from a Russian perspective. Those interested in war history, Russian theatre and seminal literature won’t want to miss the chance to see this play.

Sorry this show closed 20 May 2018, we recommend these similar productions.

Life and Fate seat view photos show what view you will get for your money. Unfortunately we do not have any seat views for this show.

Nobody has added a seat view photo for Life and Fate at Theatre Royal Haymarket yet, please be the first to share your experience.
Your basket is empty.