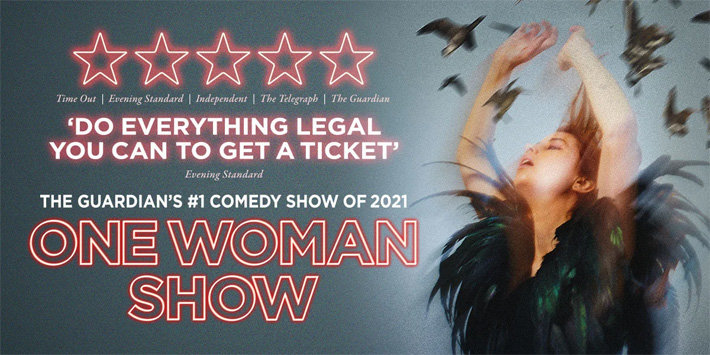 A hilarious evening of meta-comedy

It was one of the hottest tickets in London during a sold-out run at Soho Theatre, and now Liz Kingsman’s sublimely funny One Woman Show transfers to the West End for a six-week season.

Kingsman’s show is bold, unflinching, irreverent, electrifying, game-changing, raw, fiercely honest… and any other adjective that describes a young woman’s breakout work. Gleefully sending up the genre with an hour of sometimes daft but always perfectly pitched comedy, you’ll want to beg, borrow and steal for One Woman Show tickets.

One Woman Show swept up fans in Edinburgh in 2021 - where it was nominated for an Edinburgh Comedy Award - before heading south to Soho Theatre, birthplace of the most famous one woman show of recent years, Fleabag. It is both written and performed by Liz Kingsman, whose other work includes comedy troupe Massive Dad.

Be warned: this show contains spoof, satire, parody and heaps of ambition. Fans of the ubiquitous “messy millennial woman” shouldn’t miss this whip-smart show at the Ambassadors Theatre.

Liz Kingsman: One Woman Show seat view photos show what view you will get for your money. Our users will start adding seat views when the show opens.