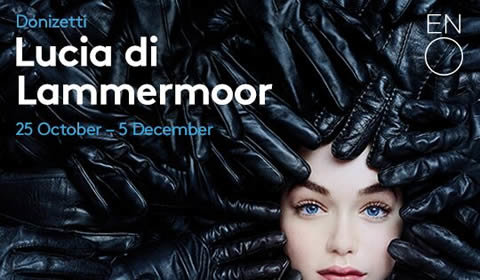 In a remote part of Scotland, two families feud, with a young, vulnerable woman caught in the middle. She is Lucia, in love with a man that she isn’t permitted to marry. Like many stories of unrequited love, Gaetano Donizetti’s compelling opera is bound to end in tragedy. Playing a strictly limited season, Lucia di Lammermoor is part of English National Opera’s new London Coliseum season.

Based on Walter Scott’s novel The Bride of Lammermoor, this 1835 Italian opera begins with Lucia waiting for her secret lover Edgardo, only to discover that she will be forced to marry another. Her brother Enrico is determined to sabotage her love for Edgardo, but his plans eventually backfire with the unfolding of terrible events.

This revival marks the first time in eight years that this opera is being staged at the ENO. With Olivier Award-winner David Alden at the helm of the production, this enigmatic, romantic and ultimately tragic opera features themes of thwarted love, familial rivalry and obsession. Lucia di Lammermoor runs at the West End’s London Coliseum from 25 October to 5 December 2018.

Special notice: Seasoned opera audiences, as well as those who are curious about the form will want to check out director David Alden’s work. He is known for making opera contemporary and relatable, so offers audiences something different from traditional opera productions.

Sorry this show closed 05 December 2018, we recommend these similar productions.

Lucia di Lammermoor seat view photos show what view you will get for your money. Unfortunately we do not have any seat views for this show.