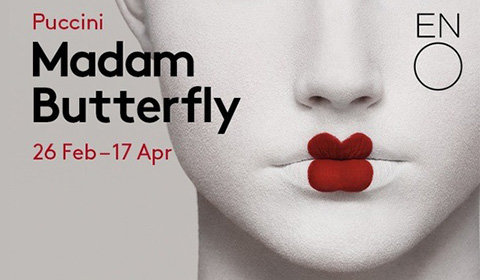 London Coliseum
16 seat views
ENO brings back an Olivier Award-winning production of Madam Butterfly to the London Coliseum. Anthony Minghella’s revival is a feast for the senses, pairing Puccini's sweeping score with traditional Japanese theatre as well as cinematic visuals. The piece boasts puppetry from pioneering theatre company Blind Summit. Discover one of opera's most enduring characters when Madam Butterfly runs for a limited time from 26 February 2020.

Written by Giacomo Puccini, with an Italian libretto by Luigi Illica and Giuseppe Giacosa, the opera is based on the 1898 short story "Madame Butterfly" by John Luther Long. It has been performed innumerable times around the world and has inspired shows such as Schönberg and Boublil's musical Miss Saigon.

This heart-breaking study of unrequited love follows a young Japanese girl named Cio-Cio-San who falls for a U.S naval officer called Pinkerton. The pair marry, but Pinkerton heads back to America just before the birth of their son. Cio-Cio-San waits night and day for his return.

Natalya Romaniw sings the role of Madam Butterfly for the first time in London. Her previous credits include an acclaimed turn as Mimì in ENO's La Bohème. Sharing the role of Pinkerton are tenors Dimitri Pittas and Adam Smith. The part of Sharpless is played by the Olivier Award-nominated baritone Roderick Williams. Mezzo Stephanie Windsor-Lewis reprises her role as Suzuki.

The production was the late Anthony Minghella's operatic directorial debut. His work for film won him several BAFTA, Golden Globe and Academy Awards. In 2006, this English National Opera production of Madam Butterfly won him an Olivier Award for Best New Opera Production.

ENO Music Director Martyn Brabbins conducts; a small number of performances are conducted by Martin Fitzpatrick. Carolyn Choa is the Associate Director and Choreographer, Glen Sheppard is the Revival Director and David John is the Revival Choreographer. Set design is by Michael Levine while costume design is the work of Han Feng and lighting design of Peter Mumford. The show's puppetry is courtesy of Blind Summit. David Parry is the translator.

This revival is a co-production with the Metropolitan Opera, New York and the Lithuanian National Opera. Experience the heartbreak and beauty of Madam Butterfly when it plays at the London Coliseum from 26 February 2020.

Age recommendation: No under 5s.

Special notice: Fans of Puccini’s works won’t want to miss out on Madam Butterfly tickets, as Minghella’s revival is an Olivier Award-winner. If you’re new to opera, the show is the perfect gateway to the genre, with its unforgettable score and beautiful storyline.

Madam Butterfly seat view photos show what view you will get for your money. Unfortunately we do not have any seat views for this show.