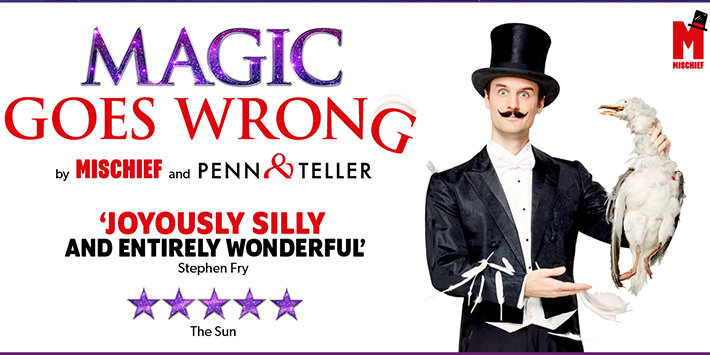 Theatrical rascals Mischief Theatre team up with Penn & Teller for Magic Goes Wrong, a chaotic magic show like no other!

Prepare to be enchanted and amazed as Mischief Theatre transform themselves into a troupe of top-class magicians… or perhaps a hapless group of fundraisers! As they attempt to stage a charity gala full of grand illusions, the magic tricks soon turn into trip-ups. Will they manage to pull one last rabbit out of the hat and reach their fundraising target?

Mischief Theatre have had London audiences rolling in the aisles since 2018 with a roster of hugely entertaining shows including The Play That Goes Wrong and The Comedy About a Bank Robbery.

Penn & Teller’s signature combination of comedy and magic have earned them world-wide fans and a spot on the Hollywood Walk of Fame. The duo have lent their expertise behind the scenes to conjure up theatrical magic with the West End’s biggest troublemakers.

Fans of Mischief Theatre and all things magic won’t miss a trick with Magic Goes Wrong tickets! Join the team for an evening of hilarious entertainment at the Apollo Theatre.

Sorry this show closed 27 February 2022, we recommend these similar productions.

Magic Goes Wrong seat view photos show what view you will get for your money. Unfortunately we do not have any seat views for this show.