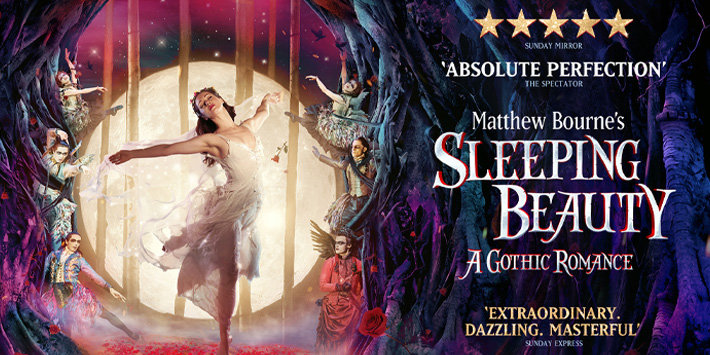 Enter a dark and dazzling world of dance this Christmas as Matthew Bourne’s hugely acclaimed production of Sleeping Beauty returns to Sadler’s Wells for its 10th anniversary.

In true Matthew Bourne style, the show combines music by Tchaikovsky with a wonderfully unique reworking of a classic tale. Set in a fantasy land inhabited by fairies and vampires, Sleeping Beauty on stage is a supernatural love story influenced by gothic romance.

Created by Olivier Award-winning choreographer Bourne and his dance-theatre company New Adventures, this unforgettable production takes audiences on a fantastical journey. Its incredible dancing, sumptuous set design and costumes transport the story across the late Edwardian era to the present day.

Since its premiere at Theatre Royal Plymouth in 2012, Sleeping Beauty has been enjoyed by audiences across the world, and became the fastest-selling production in New Adventures’ history during its original Sadler’s Wells season.

Returning to cast a spell over London, book Matthew Bourne Sleeping Beauty tickets for an enchanting display of opulence, romance and spectacular storytelling that will bewitch the whole family.

Matthew Bourne's Sleeping Beauty seat view photos show what view you will get for your money. Our users will start adding seat views when the show opens.