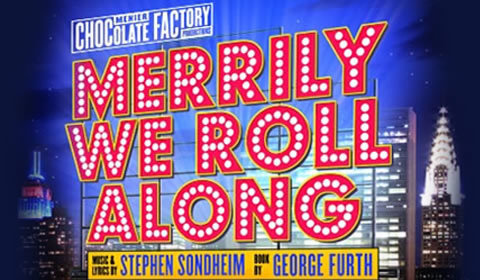 Merrily We Roll Along tickets

Harold Pinter Theatre
3 seat views
Following a sell-out season at the Menier Chocolate Factory, the stunning and critically-acclaimed musical Merrily We Roll Along dances into the Harold Pinter Theatre for an exclusive 12 week run. Directed by triple Olivier Award-winning actress Maria Friedman in what marks her professional directing debut, Merrily We Roll Along is the blissfully beautiful Broadway musical featuring Sondheim’s famous score.

Written by the legendary Stephen Sondheim and George Furth, Merrily We Roll Along is a satirical treat that takes place over three decades of the entertainment business, following the turbulent relationship of Franklin, Charley and Mary. Travelling backwards through the 1980’s and 70’s, the musical reflects on the group’s embittered middle age, to their innocent younger years. A powerfully moving story about love and friendship, Merrily We Roll Along features some of theatre’s best-known songs such as “Good Thing Going”, “Not a Day Goes By” and “Old Friends”.

Damian Humbley (The Last 5 Years, Little Shop of Horrors) stars as as Charley, alongside Olivier Award winner Jenna Russell (Sunday in the Park with George) as Mary and Mark Umbers (Sweet Charity) as Franklin, all of whom received abundant critical praise during the musical’s previous run. Further cast members include Josefina Gabrielle as Gussie Carnegie, Glyn Kerslake as Joe Josephson, Clare Foster as Beth Spencer and Zizi Strallen as Meg Kincaid.

Featuring memorable music and lyrics by Furth and Sondheim (Sweeney Todd, Into the Woods), Merrily We Roll Along is directed by Friedman, with design by Soutra Gilmour, lighting design by David Hersey, sound design by Gareth Owen and choreography by Tim Jackson. Originally opening in 1981, Friedman’s stunning revival has received more five star reviews than any other musical in West End history. Merrily We Roll Along arrives at the Harold Pinter Theatre in July 2013 for a strictly limited season.

Special notice: Those who missed out on tickets for the sell-out season at the Menier Chocolate Factory now have the opportunity to see Merrily We Roll Along in the West End! Recommended for ages 5 and up, this is one of Sondheim’s greatest musicals – a real treat for fans of his work!

Sorry this show closed 27 July 2013, we recommend these similar productions.

SeatPlan Recommends: Sit in the mid-front of the Stalls for the best overview of the stage. Good views can be found discounted in the higher tiers, but be careful of sitting towards the rear of each seating section, as the tier above often restricts the view of the stage.