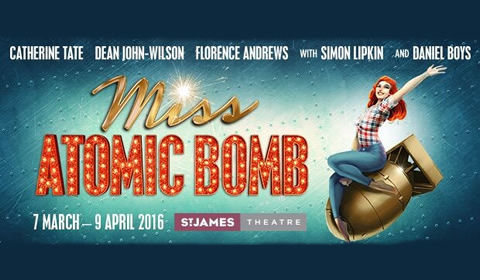 Set in 1952 Nevada, Miss Atomic Bomb follows four friends who are forced to cope with everyday life as atomic bombs are being sent into the sky. Candy permanently puzzles over the mysterious deaths of her sheep, Joey deserts the army, Myrna adores styling perfect piglets and Lou desperately needs a suitable atomic gimmick for his turn at the Golden Goose. As bombs light up the sky, the friends soon realise that their time is limited. An ambitiously bizarre mix of the effects of tourism, nuclear testing and an overbearing military, Miss Atomic Bomb was a fresh and satirical new production that explored relevant and real world issues.

Catherine Tate starred as Myrna in this musical comedy after a critically acclaimed appearance in Assassins at the Menier Chocolate Factory. Tate is well-known for her comic turns in The Catherine Tate Show, Catherine Tate’s Nan, Big School and The Office. Dean John-Wilson, who also went on to star in the West End’s Aladdin played opposite Tate as Joey, alongside Florence Andrews (A Little Night Music) as Candy, Simon Lipkin (The Lorax, Assassins) and Daniel Boys (Avenue Q). Additional casting included the youngest member of the Strallen sisters, Sasi Strallen (Billy Elliot, Chitty Chitty Bang Bang).

Written by Adam Long, Gabriel Vick and Alex Jackson-Long, Miss Atomic Bomb was part of the spring season at the St James Theatre which was placing particular emphasis on leading roles for women. With plays and musicals that centred on true stories, the theatre were determined to feature more entertaining and substantial female roles. Miss Atomic Bomb was a fresh take on current musicals that pushes boundaries and offered an alternative to productions that were currently on in the West End and was an absolute blast.

Special notice: Fans of new theatre will enjoy this fresh and ambitious musical. Catherine Tate fans will have the opportunity to see her fill an equally comic role.

SeatPlan Recommends: The St James is an intimate theatre that offers clear, unobstructed views throughout the theatre.