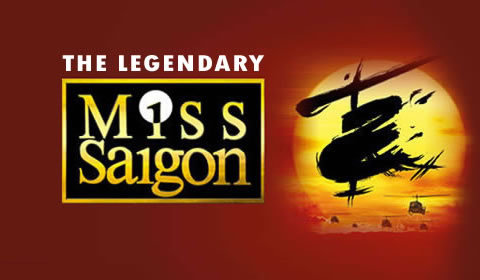 This breathtaking show from the writers of West End institution, Les Misérables, is based on Puccini’s opera Madame Butterfly. The story of a doomed romance is relocated to Saigon during the end of the Vietnam War and tells of young bar girl, Kim, who falls in love with an American GI, Chris, only for them to be cruelly torn apart by the subsequent fall of Saigon. When they are reunited years later there are surprises on both sides as the musical draws to it's tragic conclusion.

The show’s haunting score includes “The Heat is on in Saigon”, “The Movie in My Mind”, “Sun and Moon” and “Last Night of the World.”
The original production, directed by Nicholas Hytner, premiered at the West End’s Theatre Royal Drury Lane back in 1989 and played for just over 10 years. Lea Salonga was catapulted to star status by the role of Kim while Jonathan Pryce starred as the Engineer; both receiving Olivier and Tony Awards for their performances in the West End and Broadway productions. The show famously includes an on stage helicopter that was groundbreaking when it first premiered.

This new production has proved immensely popular with audiences sweeping the board at the 2015 What’s On Stage Awards. The original stars of this acclaimed revival, Eva Noblezada as Kim and Jon Jon Briones as The Engineer, continue to lead the production which is due to play until the 27th of February 2016.

Expect a tragic love story on an epic scale.

Special notice: Fans of Les Misérables won’t want to miss Boublil and Schönberg’s other greatest hit. If you’re a fan of a tragic love story with a powerful score then you will not be disappointed. Please note due to adult themes this show is not recommended for young children.

SeatPlan Recommends: From the Dress Circle you will have a good view of the overall stage but sit in the central stalls to feel the air from the famous helicopter.