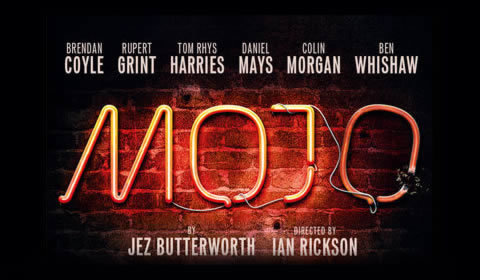 Set against the backdrop of 1950’s Soho, Mojo delves into the sleazy underworld of London’s most infamous district, unlocking the power games that play out. Taking place in the sordid Atlantic Club, we are introduced to Sweets and Potts, who wait outside a meeting of their boss Ezra and a rival nightclub owner who wants to buy Silver Johnny, a teen heartthrob and their club’s new find. When their conversation takes a grizzly turn, the pair are left in trouble. Soon, the club’s employees arrive and are forced to take the next steps before the gangsters arrive…

Written when Butterworth was just 25, Mojo is a hilarious and dark character study of a bunch of outcasts forced together by a dire situation. Rupert Grint (Harry Potter) makes his stage debut as amphetamine-obsessed Sweets, alongside Ben Wishaw (James Bond) as the psychotic Baby, Daniel Mays (Made in Dagenham, Mrs Biggs) as Potts, Brendan Coyle (Downton Abbey) as Mickey, Colin Morgan (Merlin) as Skinny and Tom Rhys Harris as Silver Johnny.

Showcasing a stellar cast at the top of their game, Mojo is sure to be an extraordinary hit. Directed by Dickson, the production features lighting design by Charles Balfour, sound design by Simon Baker and music by Stephen Warbeck. Receiving critical acclaim on its initial run, this is your opportunity to catch this modern revival at London’s Harold Pinter Theatre, opening October 2013 for a limited season.

Special notice: Fans of the various star actors will love seeing this heady combination live on stage. Those who enjoyed Jerusalem and The River will enjoy seeing one of Butterworth’s first plays. Mojo features strong themes of violence and drug abuse, and carries an age recommendation of 16 and up.

Sorry this show closed 08 February 2014, we recommend these similar productions.

SeatPlan Recommends: Those wishing to be close to the stage should sit in the mid-front of the Stalls, as rows towards the rear of the seating can be severely obstructed by the Dress Circle. Excellent views for a cheaper price can be found in the Royal Circle. Please be aware that views from the Balcony may be restricted and distant from the stage.