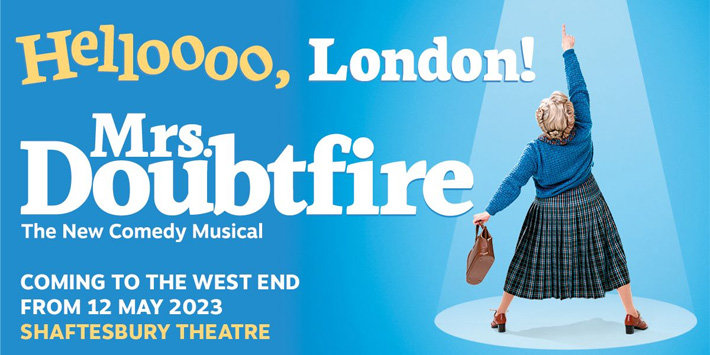 Say yoo-hoo to a new musical

Guess who's in the West End, poppets? Classic film Mrs Doubtfire is adapted into a side-splitting musical packed with heart and humour at Shaftesbury Theatre.

When struggling actor Daniel loses custody of his kids, he decides to disguise himself as elderly Scottish nanny Euphegenia Doubtfire in a bid to remain part of their lives. Soon, Daniel’s alter-ego takes on a life of her own, lands him in awkward situations, and teaches him much more than he bargained for.

Based on the 1993 film starring Robin Williams, the Mrs. Doubtfire musical brings the beloved story to the stage with hilarious effect and brand new songs, including “Make Me a Woman” and “I Want to Be There”. It opened on Broadway in 2020 and more recently celebrated its UK premiere at Manchester Opera House in 2022.

The Mrs Doubtfire London cast includes Gabriel Vick as Daniel, Carla Dixon-Hernandez as Lydia and Cameron Blakely as Frank.The show has music and lyrics by Something Rotten!’s Karey and Wayne Kirkpatrick and a book by Karey Kirkpatrick and John O’Farrell.

Mrs. Doubtfire seat view photos show what view you will get for your money. Our users will start adding seat views when the show opens.