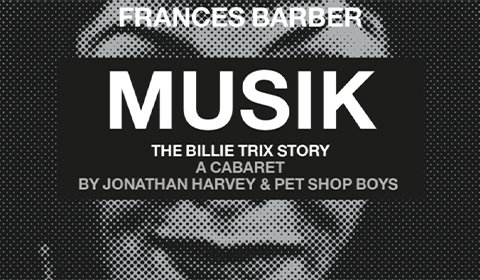 First introduced in Pet Shop Boys musical Closer to Heaven, Billie Trix is a rock icon and one-woman wonder. Breaking out of her minor role in the original musical, Trix’s solo show is an outrageous account of her life and career, from post-war Berlin and the Vietnam war to rock concerts and Andy Warhol.

Featuring six original songs by the Pet Shop Boys, Musik premiered at Edinburgh Fringe Festival in 2019. Olivier Award winner Frances Barber returns for the London run, having previously appeared in Camille and Julius Caesar on stage and Doctor Who and Dead Fish on screen.

Rock ’n’ roll, drugs, and extraordinary confessional writing: Musik at Leicester Square Theatre is an exciting and potent new show. It opens in London on 5 February 2020.

Special notice: Fans of the Pet Shop Boys’ musical Closer to Heaven will love this opportunity to discover more about Billie Trix, whilst the promise of Frances Barber in her element makes Musik a must-see.

Sorry this show closed 01 March 2020, we recommend these similar productions.

Musik seat view photos show what view you will get for your money. Click 'book this seat' and we will search for availability for your chosen seat.