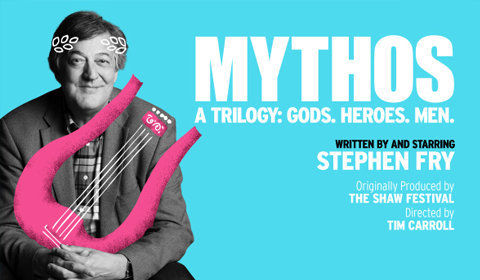 The inimitable Stephen Fry stars in Mythos A Trilogy: Gods, the first in a set of three plays which he has written himself. Catch this evocative one-man show at the London Palladium on 13 September 2019.

Gods is the first instalment of Fry’s great feat of storytelling, followed by the plays Heroes and Men which play on the following night. See them all, and make the most of this once-in-a-lifetime experience with a living legend.

Listen to gripping Greek tales that chart love, revenge, war and debauchery. Gods takes us from the disorder of primitive man to the stunning creation of the Greek pantheon.

See this extraordinary piece of theatre, written by and starring the award-winning Stephen Fry, at the London Palladium on 13 September 2019 only.

Special notice: Anybody with an interest in Greek mythology, the Classics, action, adventure and storytelling will find much to admire in this riveting series of plays. Fans of Stephen Fry shouldn't miss the chance to see him performing his own work live for a very limited two-night run.

Sorry this show closed 17 September 2019, we recommend these similar productions.

Mythos A Trilogy: Gods seat view photos show what view you will get for your money. Unfortunately we do not have any seat views for this show.