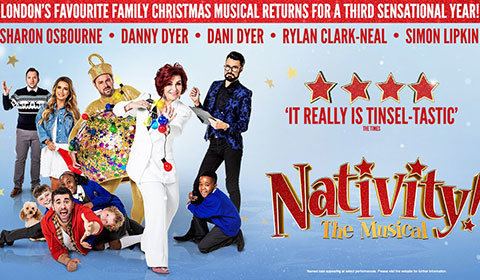 Nativity! The Musical is a big and delightful stage adaptation of the well-loved film that has been bringing festive cheer to London for three consecutive years now. After touring the UK, Nativity! The Musical will take residence at the Eventim Apollo, bringing an all-star cast including Sharon Osbourne, Danny Dyer and his daughter Dani Dyer.

Nativity! The Musical tells the story of a Coventry-based school that is preparing to put on the most dazzling, fabulous version of the nativity play ever seen. Their teacher has convinced the students that their performance will be attended by a big-shot Hollywood Producer, who promises to turn their play into a major film.

Nativity! The Musical is a feel-good musical that has become a firm favourite in London over the Christmas period, delighting theatregoers young and old alike. Within the spectacular auditorium of the Eventim Apollo, Nativity! The Musical tickets promise a brilliant evening for the whole family.

Age recommendation: Children under 2 will not be permitted. Under 14s must be accompanied by an adult.

Sorry this show closed 29 December 2019, we recommend these similar productions.

Nativity! The Musical seat view photos show what view you will get for your money. Unfortunately we do not have any seat views for this show.