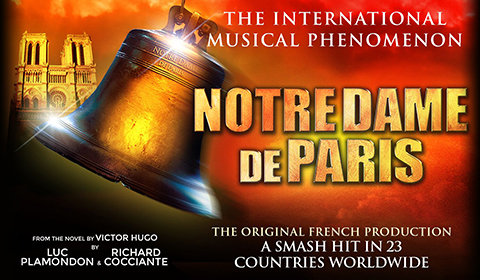 London Coliseum
40 seat views
Twenty years ago, French musical Notre Dame de Paris premiered at the Palais de Congrès in 1998, in Paris. Based on Victor Hugo’s classic novel of the same name, the musical has since been performed in 23 countries, translated into 9 languages and has had successful runs worldwide. Now, the acclaimed musical returns to the West End for a strictly limited seven performances.

Performed in its original French, with English surtitles, the well-known tale is set in Paris in 1482 and follows Quasimodo, the hunchbacked bell ringer of Notre Dame, and his unrequited love for Esmerelda, a gypsy living a life of freedom in the city. The tragic story of these two outsiders has since been adapted and retold in many forms since the original novel was published, including the 1996 Disney film.

Enzo Productions Ltd and Adam Blanshay Productions bring the show to London, which is produced by Nicolas Talar. Featuring music and lyrics by Richard Cocciante and Luc Plamondon, the production is directed by Giles Maheu and choreographed by Martino Müller. Featuring an international ensemble, the cast includes singers, dancers and acrobats to tell the classic tale. The music is provided by the superb ENO Orchestra with Matthew Brind conducting.

Principal cast members who starred in the world tour reprise those same roles for the West End run. Angelo Del Vecchio plays the starring role of Quasimodo alongside Hiba Tawaji as Esmeralda and Daniel Lavoie as Frollo. Richard Charest plays Gringoire, Alyzée Lalande and Idesse play Fleur-de-Lys, Martin Giroux takes on the role of Phœbus and Clopin is played by Jay.

Playing a strictly limited short run at the London Coliseum, this is an extraordinary, record-breaking musical that has been absent from London for nearly 20 years. Notre Dame de Paris plays at the West End venue from 23 January to 27 January 2019, with a press night on 23 January 2019.

Please note that the production will be performed in French with English surtitles.

Age recommendation: No under 6s

Special notice: French-speakers craving a bit of home, musical theatre fans and people who love to see classic literature brought to life before them will definitely want to see this French-language adaptation of Victor Hugo’s famous novel.

Sorry this show closed 27 January 2019, we recommend these similar productions.

Notre Dame de Paris seat view photos show what view you will get for your money. Unfortunately we do not have any seat views for this show.

The show was spectacular and even though it was sung in French you got carried away with the stor... More

The show was spectacular and even though it was sung in French you got carried away with the story without reading the surtitles. The set seemed simple but was very complex and ever changing throughout the show. The acrobatics were breathtaking and some audience members compared those parts to Cirque de Soliel. A definite must see if it returns. I have never experienced such a reaction and applause throughout the show from the audience, with over a 10 minute standing ovation at the end.

The entire theatre audience gave a standing ovation at the end. An exceptional musical show base... More

The entire theatre audience gave a standing ovation at the end. An exceptional musical show based on the Hunch Back of Notre Dame by Victor Hugo; Wikipedia has an excellent synopsis of the story. Sung entirely in French with English surtitles. If you've a smattering of French you'll understand a lot, the diction was very good. Wonderful music and breath taking acrobatics. I cannot praise this show highly enough. Beg, steal or borrow a ticket; this show is a MUST SEE!

My wife and I thoroughly enjoyed the excellent show - quite exceptional talents from all the cast... More

My wife and I thoroughly enjoyed the excellent show - quite exceptional talents from all the cast - amazing voices; fantastic acrobats; brilliant dancers - all in french made it even more atmospheric [and discreet screen subtitles too!] - I really needed a 7 star show rating but 5 will suffice! - a 'got to see' show!

Fantastic production! Seeing it in it's original language felt extremely special and added a lot... More

Fantastic production! Seeing it in it's original language felt extremely special and added a lot to the show itself. Phenomenal music, dancing, singing, acrobatics etc... there's something for everyone.

Just about my favourite musical of all time - lush songs, glorious hummable melodies, imaginative staging and terrific choreography, with acrobatic dancers swinging from the bells of Notre Dame. Heady stuff.